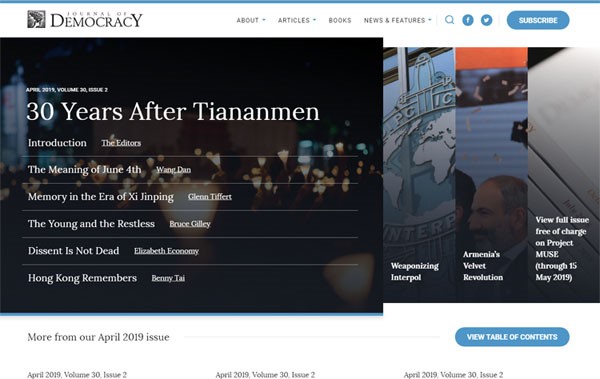 The next round of U.S.-China great power competition is poised to extend beyond the economic and military domains, morphing into an ideological competition between American free market democratic capitalism and Chinese state-driven mercantilism, says Andrew A. Michta, the dean of the College of International and Security Studies at the George C. Marshall European Center for Security Studies.

China’s deepening involvement in Europe is now registering at multiple levels—financial, technological, political, and increasingly military—and could soon reorder the foundations of Euro-Atlantic relations, he writes for The American Interest.

NB CHANGE OF VENUE to the National Press Club.

Beyond Silk and Silver: China’s New Road in the Americas

Perhaps no issue this century in the Americas has been as significant as China’s rise, from a limited presence to becoming the top trade partner of much of South America and a major investor across the region. Over time, Beijing also has become more deeply invested in the region’s media, education, and ideas sphere. Given the extent of China’s engagement, no issue in regional affairs has stirred more debate in Washington and elsewhere.

What has occurred? Where is the relationship going? What are the economic and democratic governance implications for Latin America and the Caribbean? And how should the region respond? Join what promises to be a fascinating and timely conversation on one of the most important issues today in Western Hemisphere affairs.

Please join the Council of the Americas, Americas Quarterly, and the National Endowment for Democracy for a deep-dive discussion on China’s new agenda for engagement in the Americas. This public program will highlight the forthcoming issue of Americas Quarterly, dedicated to exploring in depth the many facets of China’s regional engagement, with a panel discussion of contributors and experts moderated by the Editor-in-Chief.