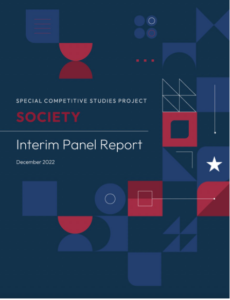 The United States could lose the digital future in two ways, according to Defending Digital Freedom and the Competition for the Future of the Global Order, an initial foray into a larger agenda to tackle a key element of the technology competition between open, democratic societies and closed, authoritarian systems:

In either case, the world becomes inhospitable to the interests of the United States and our allies and partners, bad for our businesses, and hostile to democratic values, the authors suggest. Recent protests in China and Iran are vivid reminders that citizens on the ground can still mobilize and communicate, even in closed information environments and in spite of powerful digital surveillance – often with assistance of circumvention technologies, adds the report, from the Special Competitive Studies Project’s Foreign Policy Panel Interim Panel:

In Ukraine, the government, civil society, and international partners provide a new model of how to defend against external attacks and affirm the power of an interconnected digital democracy…..The convergence of interests among democratic governments, digital freedom advocates, and private sector firms to support Ukraine against the Russian invasion offers an important model to reinforce the multi-stakeholder approach to address the spectrum of digital freedom threats that will define the immediate future.

In #SCSPTech‘s 2-2-2, “A U.S. Data Strategy Net Assessment” the Society Panel discuss the importance of a United States #datastrategy and how the U.S. can leverage #data for #economic and #societalbenefits as well as a #globalcompetitiveadvantage. https://t.co/6DyzR1zJQm