Secretary of State Mike Pompeo declared the Chinese Communist Party “the central threat of our times” on Thursday, even as he sought to talk up the prospects of a United States trade deal with Britain, which rebuffed American pressure to ban a Chinese company from future telecommunications infrastructure, The New York Times reports:

The scathing criticism of the Chinese government was the strongest language Mr. Pompeo has used as the Trump administration seeks to convince American allies of the risks posed by using equipment from Huawei, a Chinese technology giant….“When you allow the information of your citizens or the national security information of your citizens to transit a network that the Chinese Communist Party has a legal mandate to obtain, it creates risk,” he said.

The intellectual, political, and economic hostility between China’s communist leadership and liberal democracies is becoming ever clearer. If liberal democracy is to survive, it must stand up for itself, argues Oxford University chancellor Chris Patten, the last British governor of Hong Kong and a former EU commissioner for external affairs. And we should be under no illusion: open societies under the rule of law, from the Americas to Europe, Africa, and Asia, are in China’s hostile sights, he writes for Project Syndicate.

Liberal democracies cannot allow it to distort international norms in its own favor, Patten adds. For example…….

Beijing is lobbying hard to take over leadership of the international organization that oversees intellectual property, which could result in dire consequences for the future of technology and economic competition. But the U.S.-led effort to prevent this from happening faces a steep uphill climb. In March, 83 countries will vote to elect the next director general of the World Intellectual Property Organization (WIPO), a U.N.-created body founded in 1967 “to promote the protection of intellectual property throughout the world,” Josh Rogin writes for The Washington Post:

On its face, allowing China to assume leadership of the WIPO poses a clear risk to the integrity of the institution, given that the U.S. government has singled out China as the leading source of intellectual property theft in the world. The Chinese government has made economic espionage, the theft of trade secrets and forced technology transfer key parts of its state-sponsored strategy of economic aggression. If China were to control the WIPO, all kinds of fundamental intellectual property information could go directly into the hands of the Chinese government, and that, in turn, could undermine basic trust and confidence in the international patent system.

“Beijing’s ambition to head the WIPO is part of a wider pattern in which the Chinese authorities are looking to take a leadership role in critical rules-based institutions, including but also not limited to the U.N.,” said Christopher Walker, vice president for studies at the National Endowment for Democracy (NED). “They have proved adept at using these positions to transform organizations from within, often in ways that are inhospitable to governance integrity and basic democratic standards.”

The EU yesterday warned that Russia and China are waging a “digital war” with fake news and disinformation to undermine democracy,

The Wuhan coronavirus is the latest blow to the legitimacy of China’s ruling Communist Party and its leader Xi Jinping, observers suggest.

But perhaps the most tragic part of this story is that there is little reason to hope that next time will be different, says Claremont McKenna College professor Minxin Pei, a nonresident senior fellow at the German Marshall Fund of the United States. The survival of the one-party state depends on secrecy, media suppression and constraints on civil liberties. So, even as Chinese President Xi Jinping demands that the government increase its capacity to handle “major risks,” China will continue to undermine its own — and the world’s — safety, in order to bolster the CCP’s authority, he writes for Project Syndicate.

When China’s leaders finally declare victory against the current outbreak, they will undoubtedly credit the CCP’s leadership. But the truth is just the opposite: The party is again responsible for this calamity.

The epidemic is a metaphor for two political ideas that are incompatible with the realities of the modern world: The Communist Party of China and American isolationism, The Wall Street Journal’s Daniel Henninger adds:

We now live in a world in which everything travels everywhere all the time. People, products, ideas and data have become uncontainable. Centuries-long attempts by authorities to control their populations are ending. ….Those masks and the mass lockdowns of Chinese cities are themselves striking metaphors of the attempt by the Communist Party, since 1949, to control what the people of China can say and do. But the party’s tools of information control, notably its divisions of internet monitors, are collapsing beneath the coronavirus, even as President Xi Jinping told his censors this week to “strengthen the guidance of public opinions.”

A forthcoming forum will highlight a spectrum of Russian and Chinese overt and covert activities in Europe, ranging from benign state tools, such as public diplomacy, to more malevolent efforts, including direct interference in electoral processes, Harvard’s Belfer Center reports:

Please join the Project on Europe and the Center for European Studies for an event with Jessica Brandt, Head of Policy and Research, Alliance for Securing Democracy, and Torrey Taussig, Research Director, Project on Europe, on Europe’s counter-strategy against Russia and China’s assaults on free and open societies across the continent. Sebastián Royo, Professor of Government at Suffolk University, and José Manuel Martinez Sierra, Jean Monnet ad Personam Professor in EU Law and Government at Real Colegio Complutense, will chair the discussion. 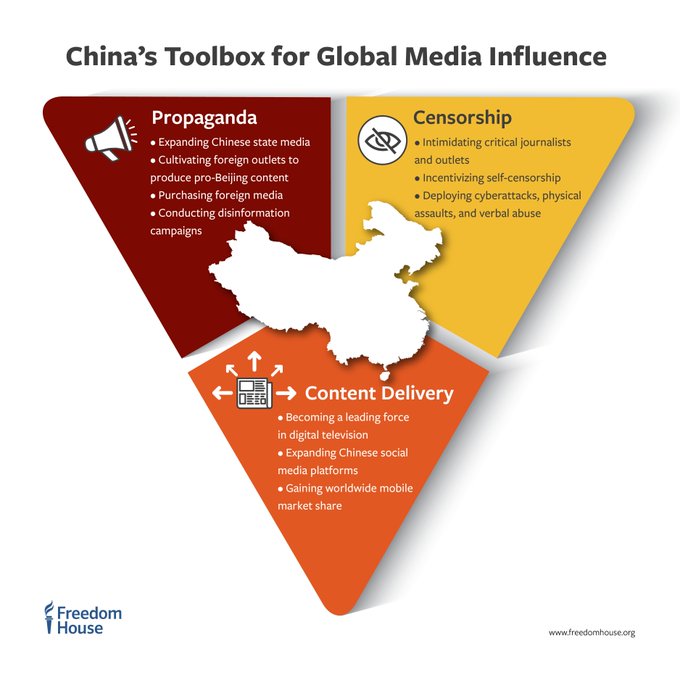