The contours of a new U.S.-China “tech cold war” have become clear, but who, if anyone, will benefit from this competition remains an open question, notes Adam Segal, Director of the Digital and Cyberspace Policy Program at the Council on Foreign Relations.

China is racing to develop semiconductors and other core technologies so as to reduce its vulnerability to supply chains that pass through the United States. In pursuit of that goal, its leaders are mobilizing tech companies, tightening links to the countries participating in China’s Belt and Road Initiative, and sustaining a campaign of cyber-industrial espionage, he writes for Foreign Affairs.

Some worry that China’s authoritarian regime has the advantage of being able to throw vast sums of money at emerging technologies like blockchain and AI, but “the Chinese way is not necessarily better,” said Jason Brett, founder and CEO of Value Technology Foundation — a think tank focused on blockchain technology. The U.S., like other democratic countries, may be slower to act, “but once it identifies an issue, it is able to rally together to beat back totalitarian regimes, just as we did in WWII,” he told Cointelegraph.

Report: How democracies can push back on China’s growing tech dominance https://t.co/SD9TngqbRU

A group of researchers from Europe, the U.S. and Japan are proposing a “tech alliance” of democratic countries in response to the Chinese government’s use of technology standards and its tech sector as instruments of state power abroad, according to a version of the proposal viewed by Axios.

Technological rivalry may dominate the 21st century world. But so far, democratic nations have not yet acted in concert to shape standards and secure their infrastructure in the face of a strong authoritarian challenge, writes Axios China expert Bethany Allen-Ebrahimian. 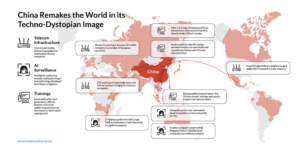 Analysts from the Center for a New American Security, the Mercator Institute for China Studies in Germany, and the Asia Pacific Initiative in Japan have come up with a blueprint to establish digital privacy guidelines, secure supply chains and conduct joint research development in line with democratic values, she adds:

The proposal, called “Common Code: An Alliance Framework for Democratic Technology Policy” to be published next month, recommends that founding members of the new tech alliance include Australia, Canada, France, Germany, Italy, Japan, South Korea, Netherlands, United Kingdom and the U.S., as well as the European Union. It includes 14 specific recommendations, intended to serve as a “shovel-ready” how-to guide for setting up the new body.

“The status quo of uncoordinated and reactive technology policy-making for the major democratic technology powers in Asia, Europe and North America means growing risk of ceding their technological leadership,” the authors contend. RTWT

Produced by the International Forum for Democratic Studies at the National Endowment for Democracy, the Power 3.0 podcast examines how modern authoritarian regimes like China  have in some ways leapfrogged democracies through exploiting aspects of globalization, including communication technologies, social media networks and other features of the Internet.