Now is the time to think faster, more creatively and more strategically about shaping the future before losing too many of the gains in the spread of democracy and prosperity that resulted from the Berlin Wall’s collapse, argues Frederick Kempe, president & CEO of the Atlantic Council.

“The problem is that the factors that went into winning the Cold War are lacking now,” he writes: “a relatively consistent strategy that had evolved over decades, a determined and mostly unified alliance, and a Soviet adversary that was militarily strong but economically weak and one-dimensional, with an economy driven primarily by its energy production.”

“The old historical rhythm that has laid the foundations of the Western liberal order has come to an end,” Mathew Burrows argues in Global Risks 2035 Update: Decline or New Renaissance. “Without a political, intellectual and, some say, spiritual renaissance that addresses and deals with the big existential tests facing humanity we will not be able to move together into the future.”

In Present at the Re-Creation, Ash Jain and Matthew Kroenig outline a strategy for shaping the international system that accepts that the status quo is unsustainable, and call upon the world’s democracies to deepen cooperation to revitalize support for a rules-based system.

But democracies often lack the capacity to adapt quickly to rising threats, a recent Washington Post Live event on Robert Kagan’s “The Strongmen Strike Back” was told.

Democracies “don’t move quickly,” said General John Allen, President of the Brookings Institution. “That’s the difference between an authoritarian and an autocratic state, or a totalitarian state: They can twist quickly, but they’ve got very little shock absorbency.”

Technology will be a critical battleground, said Wendy Sherman, former Undersecretary of State.

But as demonstrations erupt from Iraq to Lebanon to Egypt, is the United States sending signals that it no longer has any stomach for democracy promotion? Colum Lynch asks in Foreign Policy.

“The White House has taken some concrete moves in the last two and half years that [have] effectively downgraded democracy support,” said Frances Brown, the former director for democracy on the National Security Council (NSC) under both Obama and Trump until she left her post in 2017. “We haven’t seen the White House playing that kind of interagency convening role on many policy processes.” 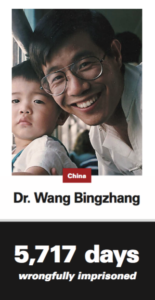 An economic alliance can bolster the defense of democratic values, argues Times Wang, a lawyer from Montreal who is writing a book about his father, Wang Bingzhang, a Chinese political prisoner.

Suppose that in 2010, Norway had been part of a treaty in which the core promise was that democracies that stood up for democratic principles, and are being retaliated against economically, would be supported by the other participating countries in order to ease their economic pain, he writes for the Globe and Mail. For example: Suppose Norway could show that a US$100-million decline in salmon exports were attributable retaliation over Liu Xiaobo winning the 2010 Nobel Peace Prize. Under the treaty, that might trigger an obligation for other democracies in the agreement to increase purchases of Norwegian salmon, or even to make direct cash transfers, until Norwegians were more or less made whole.