Is democracy broken? Vox’s Sean illing asks. Harvard politics professor Daniel Ziblatt, co-author (along with Steven Levitsky) of 2018’s How Democracies Die, explains why democracies collapse, what norms are most essential to preserving a healthy democracy, and what happens when a major party in a liberal democratic system decides to stop playing by the rules.

But assessments that “the expansion of democracy has stalled globally” owe too much to a conservative notion of democracy, according to Pankaj Mishra, author of The Age of Anger. It fails to grasp that democracy is, above all, a social sentiment, a potentially revolutionary demand for equality and dignity — what by the 20th century in the West had ended millennia of rule by kings and the feudal landowning class, he writes for Bloomberg:

Alexis de Tocqueville, the sharpest analyst of democracy, prophesied that it was the inescapable fate of all societies, no matter how deeply hierarchical. He was clear that having “destroyed monarchy and aristocracy,” democracy would not “stop short before the bourgeoisie and the rich.” ….The practical challenge, now as much as then, is how to make mass democracy compatible with individual liberty — how to find political and economic institutions capable of deploying the tremendous energy of social mobilisation for the larger good.

“In the meantime, we should resist concluding that democracy is in decline,” Mishra argues. “For, if democracy means rule of the people, and a demand for social equality, then we are witnessing its flowering in the most populous parts of the world.”

Democracy and capitalism mutually support each other and enable resilience through turbulence and crisis, according to a new analysis, M Kerem Coban writes for the LSE Business Review. Torben Iversen and David Soskice’s Democracy and Prosperity: Reinventing Capitalism through a Turbulent Century explains why the demands of the middle class, mediated through either majoritarian or proportional electoral systems, are the key to understanding how democracy reinforces capitalism and how capitalist economies have remained resilient democratically, he observes.

Democracy and Prosperity is a great addition to the recent debate on the ‘crisis of democratic capitalism’, alongside Buying Time by Wolfgang Streeck, Democratic Capitalism at the Crossroads by Carles Boix and Cultural Backlash by Pippa Norris and Ronald Inglehart, he adds.

The Global State of Democracy 2019 – Addressing the Ills, Reviving the Promise, the second edition of International IDEA’s flagship report, will be launched in Brussels on 19 November 2019. The report provides a health check of the state of the world’s democracy, analyzing trends, opportunities and challenges across and within regions. Beyond the diagnostic and in order to help re-balance the current democracy debate, the report seeks to provide policy recommendations, building on the good practices and cases which have shown resilience.

Despite widespread agreement that civics education is a pillar of democracy, there is little consensus about what it should look like, SAIS adds. On November 6, The Atlantic and the Stavros Niarchos Foundation Agora Institute at Johns Hopkins University will bring together thought leaders from education, business, and government to discuss civics education in a moment fraught with uncertainty for our democratic values and institutions. 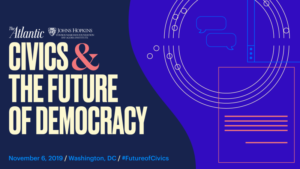 For more information, or to register, visit futureofcivics.theatlantic.com If you are unable to attend in person, please join us via livestream on Facebook