Around the world, democracies are getting weaker and elected politicians are becoming more unpopular. Are they serving the people—or themselves? The Economist asks (see below).

The Crisis of Democracy and the Role of the Nation State is the focus of a discussion at Berlin’s Wissenschaftszentrum für Sozialforschung (Social Science Research Center) with Sascha Kneip, John Keane (University of Sidney/WZB, Daniel Ziblatt (Harvard/WZB), co-author of How Democracies Die, and Wolfgang Merkel (WZB) (above).

By the 2020s, philanthropists and community builders realized the only way to change culture and weave the social fabric was by creating an A.F.L.-C.I.O. of civil society, with big national voices and large, decentralized national organizations so that people across America had easy and practical pathways to get involved in community revival, he projects in A Ridiculously Optimistic History of the Next Decade. 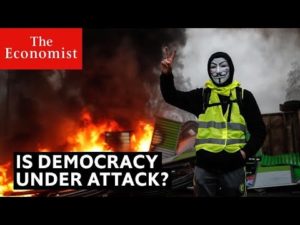 In celebration of the Journal of Democracy‘s 30th anniversary issue, editors and contributors will gather for reflections and discussion on authoritarianism and the global state of democracy.

Sheri Berman is professor of political science at Barnard College. Her works include Democracy and Dictatorship in Europe: From the Ancien Régime to the Present Day (2019) and The Primacy of Politics: Social Democracy and the Making of Europe’s Twentieth Century (2006).

Ladan Boroumand is cofounder and senior fellow at the Abdorrahman Boroumand Center for Human Rights in Iran. She is currently writing a book on the tectonic social changes taking place within the Islamic Republic of Iran.

Thomas Carothers is senior vice-president for studies at the Carnegie Endowment for International Peace. His most recent book (coedited with Andrew O’Donohue) is Democracies Divided: The Global Challenge of Political Polarization (2019).

Larry Diamond is senior fellow at the Hoover Institution and the Freeman Spogli Institute for International Studies at Stanford University. He is founding coeditor of the Journal of Democracy and the author, most recently, of Ill Winds: Saving Democracy from Russian Rage, Chinese Ambition, and American Complacency (2019).

William J. Dobson is the incoming coeditor of the Journal of Democracy. He previously served as Chief International Editor at NPR, and has held senior editorial positions with Slate magazine, Foreign Policy, and Foreign Affairs. He is the author of The Dictator’s Learning Curve: Inside the Global Battle for Democracy (2012).

Shanthi Kalathil is senior director of the National Endowment for Democracy’s International Forum for Democratic Studies. Her publications include Diplomacy, Development and Security in the Information Age (2013) and (with Taylor C. Boas) Open Networks, Closed Regimes: The Impact of the Internet on Authoritarian Rule (2003).

Steven Levitsky is David Rockefeller Professor of Latin American Studies and professor of government at Harvard University. He is the author (with Lucan Way) of Competitive Authoritarianism: Hybrid Regimes after the Cold War (2010).

Yascha Mounk is associate professor of the practice of international affairs at Johns Hopkins University and the author of The People vs. Democracy: Why Our Freedom Is in Danger and How to Save It (2018).

Minxin Pei is Tom and Margot Pritzker ’72 Professor of Government and George R. Roberts Fellow at Claremont McKenna College. His books include China’s Crony Capitalism: The Dynamics of Regime Decay (2016).

Marc F. Plattner. founding coeditor of the Journal of Democracy and former vice president for research and studies at NED, is the author of Democracy Without Borders? Global Challenges to Liberal Democracy (2008).

Christopher Walker is vice president for studies and analysis at NED. He is coeditor with Larry Diamond and Marc F. Plattner of Authoritarianism Goes Global: The Challenge to Democracy (2016) and coeditor with Jessica Ludwig of Sharp Power: Rising Authoritarian Influence (2017).

Lucan Way is professor of political science at the University of Toronto. He is the author (with Steven Levitsky) of Competitive Authoritarianism: Hybrid Regimes after the Cold War (2010).