The populist test to liberal democracy will remain robust throughout the 2020s,  argues Yasmeen Serhan, a London-based staff writer at The Atlantic:

Across Europe, populist leaders have displayed their willingness to tread over democratic institutions in order to see their political agendas realized—from Viktor Orbán’s crackdowns on academic and press freedom in Hungary to the right-wing populist Law and Justice party’s efforts to overhaul the state media and judiciary in Poland. As populist parties gain a stronger foothold, the 2020s could see more of the same.

When she asked two experts whether this decade could see voters become as disillusioned with populist parties as they became with their more mainstream counterparts in the past one, both said it was possible—but unlikely, at least in the short term, Serhan adds.

“It’s going to be a very long-term thing to experience the disillusionment from a government that has failed you,” said Daphne Halikiopoulou, an associate professor of comparative politics at the University of Reading, in England. 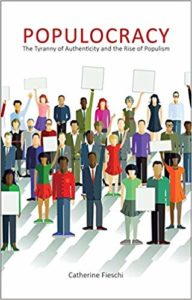 And even if voters do become dissatisfied with populist parties, it doesn’t mean a return to the politics of the early 2000s, said Catherine Fieschi, the executive director of the London-based consultancy Counterpoint and the author of Populocracy: The Tyranny of Authenticity and the Rise of Populism,  “There is no normal to go back to.”

The new decade seems poised to be as volatile and divisive as the Roaring ‘20s a century ago. Indeed, the historical parallels are dramatic and disturbing, he writes for World Politics Review, Now, as then, the forces of chaos and division include populist nationalism, authoritarian politics, nativist intolerance, political extremism, technological disruption,

Survey experiments in several countries suggest that many voters are willing to put their partisan interests above democratic principles—a finding that may be key to understanding democratic backsliding, notes analyst Milan W. Svolik. Aspiring autocrats succeed in subverting democracy only when given the opportunity by a factious public, he wrote in Polarization versus Democracy, an article for the National Endowment for Democracy’s Journal of Democracy.