‘Democracy is not a spectator sport’ was a phrase that George Shultz (above) proudly wore on his favorite tie, and a message that we need desperately to remember in our challenged and battered country today, notes Condoleezza Rice, the director of the Hoover Institution, and secretary of state from 2005 to 2009.

“George will be remembered as one of the most influential secretaries of state in our history,” she writes for the Post. “He was President Ronald Reagan’s most trusted adviser as the Cold War was drawing to a close. His deft touch in reading and encouraging Reagan’s instincts, first to challenge the Soviet Union, and then to find common ground through diplomacy, served the president and the country well.”

“Shultz was a key player, alongside President Ronald Reagan, in changing the direction of history by using the tools of diplomacy to bring the Cold War to an end,” the Hoover Institution at Stanford University said in announcing his death on Saturday, POLITICO adds.

in March 2016, he was one of 139 foreign policy thinkers and professionals to sign an open letter to the U.S. presidential candidates in support of advancing democracy in a manner that does not entail imposing American values or staging military interventions. 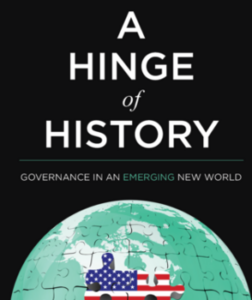 His most recent book, published in the fall, was A Hinge of History: Governance in an Emerging New World, written with James Timbie, a longtime State Department adviser, the Times reports. In the book, Mr. Shultz argued that the world is at a pivot point in history, much like the one it reached at the end of World War II, requiring international cooperation in grappling with an era that will bring fundamental changes in education, migration, national security, technology, economics and democratization.

But Shultz’s “most intimidating skill was his ability to keep his mouth shut — maintaining a glacial, withering silence more devastating than any verbal riposte,” says the Post’s David Ignatius. “It was part of the intellectual edge that made Shultz one of the most effective public servants of his generation. What Shultz possessed to an unusual extent was good judgment.”

But the Reagan-Shultz relationship had shaky moments, too, Reagan biographer Lou Cannon writes for the Post. In the summer of 1983, when hard-line rivals attempted to sideline Shultz, the secretary of state barged into the Oval Office and confronted the president. According to Post reporter Don Oberdorfer, writing in “The Turn: From the Cold War to a New Era,” Shultz told Reagan: “Either you want a secretary of state who is sort of an errand boy — and if that’s what you want, it’s not me — or you want somebody you can have some confidence in.”

The secretary of state’s main criticism of the president was his lack of attention to detail and an inclination to support Third World autocrats, provided they were firmly anti-communist, the FT adds. A particular case was president Ferdinand Marcos of the Philippines, whom Reagan would have backed to the hilt. Shultz preferred a move to democracy and prevailed. 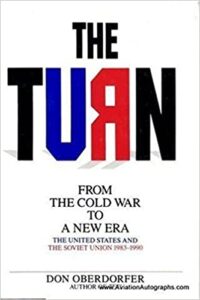 In the 1985 political crisis in the Philippines, opposition leader Corazon Aquino appeared to have defeated 20-year President Marcos, a longtime ally of the United States, in an election marked by widespread fraud on the government side, the Post adds:

Marcos tried to declare victory. Mr. Shultz argued that it was time for the United States to break with Marcos. Reagan grudgingly followed Mr. Shultz’s advice that he threaten Marcos with the loss of military aid and urge him to give up power, according to an account by historian James Mann. Marcos eventually agreed to step down, and Aquino became president.

Mann wrote in “Rise of the Vulcans” that Mr. Shultz showed “remarkable tenacity” that helped the Philippines make the transformation from dictatorship to democracy.

“Secretary of State Shultz was a true statesman and defender of freedom,” said the International Republican Institute. “Shultz’s commitment to diplomacy and the spread of democracy played a crucial role in bringing a peaceful end to the Cold War. The world is a better place thanks to his selfless contributions,” added IRI, which in 2010, gave Secretary Shultz the Freedom Award for his dedication to America and support for the creation of the National Endowment for Democracy. 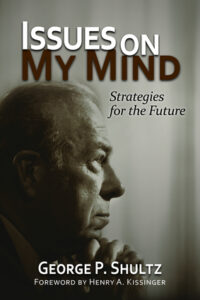 In June 2012, marking the 30th anniversary of President Ronald Reagan’s “Westminster Address,” the National Endowment for Democracy (NED) honored former Secretaries of State Shultz and Madeleine K. Albright (above) with its Democracy Service Medal. “Secretary Shultz was there at the creation of the Endowment playing a crucial role in launching America’s efforts to assist the spread of democracy abroad,” said NED President Carl Gershman (below).

“Perhaps most of all, George Shultz was a patriot. He took pains to remind his fellow diplomats that their first duty was always to the American people,” said Secretary of State Antony J. Blinken.

“Before he sent new U.S. ambassadors to their overseas posts, he would invite them to his office and direct them to a huge globe in the corner. ‘Point to your country,’ he would say. The ambassador would spin the globe and point to the country where he or she was heading. Then the Secretary would gently place their finger on the United States. ‘That’s your country.’ He never forgot it,” Blinken said in a statement.

The frontispiece in Shultz’s memoir is a quote from Isaiah Berlin: “At crucial moments, at turning points, when factors appear more or less equally balanced, chance, individuals and their decisions and acts, themselves not necessarily predictable—indeed seldom so—can determine the course of history,” adds Elliott Abrams, Senior Fellow for Middle Eastern Studies at the Council on Foreign Relations, and assistant secretary of state in the Reagan administration under Shultz. 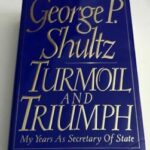 This may have been Shultz’s tribute to Reagan, but it is a fair summary of Shultz’s place in contemporary history, he writes for Commentary.

After Shultz visited Israel as honorary chair of the Israel Democracy Institute’s International Advisory Council, the Times of Israel characterized him “as a rock of unshifting fundamentals.”

“He expressed his enduring commitment to Israel by readily agreeing to help establish a ‘think-and-do tank,’ as he called it, dedicated to preserving and strengthening Israel’s embattled democracy ,” said IDI. “Never losing site of the fragility of our country’s fledgling democracy, Secretary Shultz foresaw the need for an independent, non-partisan think-tank that would provide Israeli decision-makers with policy proposals based on data, research and expertise.”

With George Shultz, the United States has lost its greatest secretary of state since Dean Acheson, Will Inboden writes for Foreign Policy.

“When he took office in 1982, Shultz recognized several emerging global trends that may appear clear in hindsight, but were seen by few other leaders at the time,” he argues. “He saw the coming wave of democratic transitions in Asia, Latin America, and Eastern Europe—and made supporting democracy a policy priority. He saw the emerging communications and information revolutions, and put the United States in the lead of shaping globalization worldwide.”

A true American hero, George Shultz, passed away today. He also was a generous @Stanford @HooverInst colleague, and a wise mentor to me personally for decades. In public service, academia, friendship & fun — still going strong at 100 — he was THE model of a life well lived.