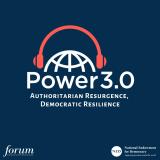 The world offers more lessons about how democracies grow weak and brittle than how they can be revived, but it should at least be possible to figure out a systematic way to repudiate illiberalism, notes New York Times columnist Michelle Goldberg.

In the latest episode of the Power 3.0 blog, Marc F. Plattner  discusses the convergence of interests between elected populist leaders and resurgent authoritarians and the ways these actors are exploiting the crisis of confidence in political parties evident in a growing number of democracies to undermine democratic institutions and promote alternative models of governance.

“The central figure in this debate is Hungary’s Prime Minister Viktor Orbán, who is arguably the most influential figure today on the European right,” Plattner writes in the latest issue of the Journal of Democracy.

“By seeking to embrace democracy and at the same time to jettison liberalism, Orbán is blazing a trail that he hopes to lure others on the right to follow,” he adds. “It is useful to review the strange history of the term ‘illiberal democracy’ in order to understand how Orbán has tried to wield it for his own purposes.

Marc F. Plattner is founding coeditor of the Journal of Democracy and previously served as a vice president for the National Endowment for Democracy. Christopher Walker, NED vice president for studies and analysis, and Shanthi Kalathil, senior director for NED’s International Forum for Democratic Studies, cohost the conversation.