The relationship between liberalism and democracy, generally compatible but occasionally tense, is becoming more fraught at both domestic and international levels, observers suggest.

The dispute over the rule of law in some member states is damaging the European Union’s moral legitimacy. The current breakdown of EU norms has exposed a powerlessness on the part of the EU institutions, as they seek to project, enforce and embody its founding values, the Financial Times reports:

Hungary is at the vanguard of a clutch of EU countries that have gone out of their way to laud ideas that many in Brussels believe to be illiberal. In Poland, President Andrzej Duda has also warned this year that “LGBT ideology” is more “destructive to man” than Soviet communism. All this is a direct challenge to the values and legal principles the EU claims to stand for, which have become a central tool of its foreign policy and soft power. The result is that the EU is increasingly open to charges of hypocrisy, which both damages its moral legitimacy and could sow doubt for businesses about whether they can trust EU legal systems.

“It has been a political choice not to halt what has been happening in Hungary and Poland,” says Rosa Balfour, director of the Carnegie Europe think-tank. “It’s hugely damaging — it’s not just about democracy, it’s about the functioning of the EU.”

Above all, the rule of law battles expose a costly failure of EU foresight about how “fundamental things are actually much more fragile than we thought they were”, says former EU adviser Julia De Clerck-Sachsse, now a senior non-resident fellow at the German Marshall Fund of the United States. “There was so much euphoria that democracy was winning that there was a sense we didn’t need to protect it,” she says. “But it was much more vulnerable than we would ever think.”

For the liberal internationalists of the twentieth-century, avoiding human annihilation by war depended on the establishment and enforcement of a global solution-structure built on the triage of free trade, the spread of democratic government, and the international rule of law, IDC Herzliya Professor Amichai Magen observes. 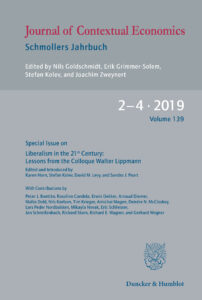 All drew upon and appealed explicitly to liberalism as a means of constructing and legitimizing their desired order. In the twenty-first century those concerned to preserve liberalism will have to, once again, generate and struggle for liberal ideas and institutions that prove themselves superior over their competitors, he writes in a contribution to Liberalism in the 21st Century: Lessons from the Colloque Walter Lippmann, from the Journal of Contextual Economics.

There is no doubting the potency of the current reaction against liberalism, on left and right (but with the right achieving more spectacular electoral returns). But even the economics do not map neatly onto the conditions that cultivated totalitarianism in the 1920s—the issue then was not mere disappointment but hyper-inflation, mass unemployment and penury, argues analyst Rafael Behr.

The real threat, then, comes less from fascistic doctrines that explicitly repudiate liberalism than from the loss of a common public frame of reference in which ideas of any kind can be civilly debated, he writes for Prospect:

None of this is to diminish the threat of nationalist populism, or any far-left equivalent. But it is also important not to mistake shallow clickbait totalitarianism for the real thing. The fear of repeating old horrors can be perversely comforting because it implies we will know the enemy when we see it. We make a fancy-dress monster of 20th-century atrocities to frighten ourselves into vigilance, but also to reassure ourselves that vigilance works. The danger is that we scour the wrong horizon, looking in the rearview mirror for an old threat to return without exercising enough imagination about how a new form of dictatorship could evolve. It would work with the libertarian current of the digital culture. It would not seize democratic institutions by military force, but wash away their foundations with the acid of cynicism.

Intense partisan polarization is “a phenomenon that afflicts many of our peer democracies and the advanced liberal democracies of the world and many other emerging democracies,” he said at a Wednesday evening event hosted by the Master of Liberal Arts Program, the Stanford Daily’s Kassandra Delgado reports.