Democracy may be facing a crisis, but….

Now is a time “for resolve, not panic,” says Stanford University’s Larry Diamond. In his  latest book, Ill Winds: Saving Democracy from Russian Rage, Chinese Ambition, and American Complacency, he lays out a host of ideas for safeguarding democratic institutions, Datebook’s Kevin Canfield reports. He proposes a 10-step plan for short-circuiting kleptocrats like Russian President Vladimir Putin, cutting off their access to shell companies and money-laundering vehicles. 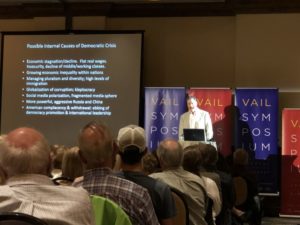 Enriching a class of crony capitalists is part of the autocrats’ own “12 step program,” which also includes demonizing political opposition, and undermining the independence of the courts and media, Diamond told a Vail symposium (right).

Diamond is co-director of the International Forum for Democratic Studies which recently launched a series of working papers examining emerging challenges to democracy in a globalized era. “Pushing on an Open Door: Foreign Authoritarian Influence in the Western Balkans,” explores the growing influence of Russia, China, Turkey, and the Gulf States in the Western Balkans,” and “To Catch a Kleptocrat: Lessons Learned from the Bien Mal Acquis Trials in France” offers lessons for civil society organizations interested in pursuing strategic litigation to combat transnational kleptocracy.