The two core components of liberal democracy—liberalism and democracy—have been diverging for some time. For most of the modern era, the two concepts went hand in hand, at least in the West, notes Shadi Hamid, a senior fellow at the Brookings Institution and a research professor of Islamic studies at Fuller Seminary.

The liberal tradition, which emerged after Europe exhausted itself with wars of religion, is eloquently captured in documents such as the Bill of Rights. Meanwhile, democracy, while requiring some minimal protection of rights to allow for fair and meaningful competition, is more concerned with the preferences of majorities as expressed through regular elections. Democracies must be responsive to what voters actually vote for. This is what makes democracy great. It is also what makes democracy frightening. No one knows with certainty what will happen in an election before it happens, he writes for The Atlantic, in an extract from his new book, The Problem of Democracy: America, the Middle East, and the Rise and Fall of an Idea. 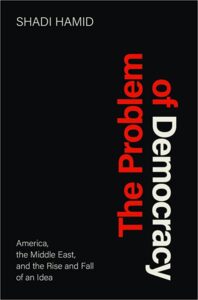 Before liberalism and democracy began to diverge in the West, they were diverging elsewhere. Muslim-majority countries in the Middle East as well as Southeast Asia have been laboratories of illiberalism. They were ahead of their time, offering a dark preview of a world in which culture, identity, and religion (“who we are”) replaced economic concerns (“what works”) as the fulcrum of political conflict. This is what made the trajectory of the Arab Spring so frustrating for many American observers. This was a world where the most important wars were culture wars, adds Hamid, who discusses his book with Stanford’s Francis Fukuyama (above).

Assessing the appeal of liberal ideas, or the lack thereof, is crucial. Even in the world’s most advanced democracies, post-liberal movements are gaining strength. If democracy is part of a package that includes within it unrelated premises about the nature of progress and the human person, then it is less likely to be accepted in societies where those premises are not shared. And, as it turns out, the world has more of these societies than we might like to admit.

Democracy as a system and a set of procedures—as a way of regulating politics without predetermining its outcomes—allows voters to decide their own course and determine what values are most important to them. Democracy allows for peaceful transfer of power, even—or particularly—in ideologically polarized contexts. As a set of mechanisms for conflict regulation, it contributes to long-term, if not short-term, stability. Democracy also offers predictability, because the losers of elections have the chance to fight another day. I call this approach “democratic minimalism” because it accepts democracy for what it is rather than what it might, or might not, become.

To try to compel people to become liberals is the mark of hubris—bound to be either ineffective, unrealistic, or both. After all, a liberalism not freely chosen is self-negating. Democratic minimalism, by contrast, is more modest, while still retaining the mark of ambition. In politics, one has friends and enemies. The challenge—not just in the Middle East but in the United States and seemingly everywhere else—is accepting this natural state of enmity and transforming it into something more manageable. That might not sound like a lot to aspire to, but it may be enough. RTWT