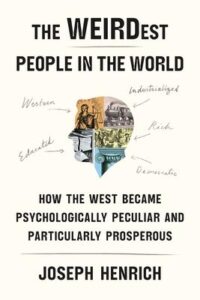 It’s just two months since former US president Barack Obama solemnly told The Atlantic magazine that his country was “entering into an epistemological crisis”, the FT’s Gillian Tett observes. “If we do not have the capacity to distinguish what’s true from what’s false, then by definition the marketplace of ideas doesn’t work,” he declared. “And by definition our democracy doesn’t work.”

Indeed, a recent Edelman survey suggests that many Americans today only have faith in people and institutions that are familiar to them, be it in their neighborhood, company, line of sight or social group, meaning that “trust is local”. Tribalism is rife, in other words, in both ideological and epistemological terms, she observes, citing a recent book by the Harvard evolutionary biologist and anthropologist Joseph Henrich, The Weirdest People in the World, in which he outlines the mentality of Western, Educated, Industrialized, Rich and Democratic (“WEIRD”) people, versus other non-WEIRD groups:

For Henrich, WEIRD modes of thought are based around the ideals of individualism, moral consistency and, above all, the type of sequential logic used in alphabet-based writing systems. Western elites tend to assume that it is the only valid mode of thought. But in reality, Henrich notes, most societies throughout history have used different mental approaches: they see morality as context-based, presume that someone’s identity is set by family and, crucially, favour “holistic reasoning” not “analytical reasoning”. “Analytic thinkers see in straight lines,” Henrich writes. “Holistic thinkers focus not on the parts but the whole… and expect time trends to be non-linear, if not cyclical.”

“This last point is difficult to appreciate if you have been educated for years in a system predicated on WEIRD logic and thus take it for granted,” Tett adds. “But the key point to understand about non-WEIRD modes of thought is that gut reactions to the patterns in an ecosystem matter more than focused, one-directional reasoning, and that performative symbols count more than words.” RTWT