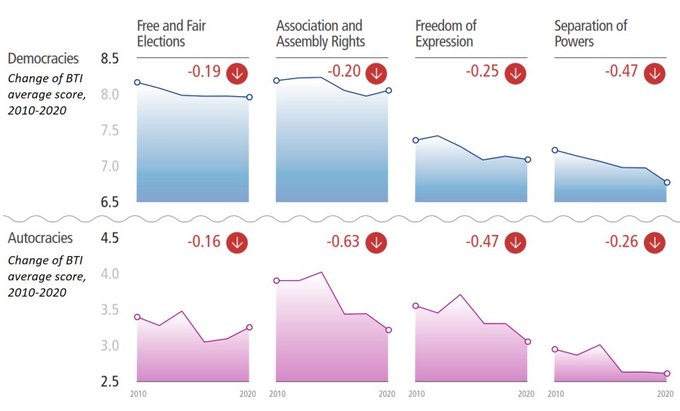 The failure of attacks on American democracy shows the value of strong institutions, says an adviser to President-elect Joe Biden. If the United States can overcome such assaults, it may be able to help its Latin American neighbors do the same, the Economist suggests:

Democracy is in retreat. The Bertelsmann Foundation, which ranks countries’ democratic strength on a ten-point scale, finds that the scores of seven democracies in Latin America have fallen by 0.8 points or more since 2010. Recently Peru’s Congress unseated the second of two presidents within 30 months. Nayib Bukele, El Salvador’s president, has laid the groundwork for dictatorship. Elections in 2021, including in Ecuador, Peru and Nicaragua, could bring populists to power or consolidate authoritarians’ rule.

Though Latin America’s democratic institutions have proved remarkably resilient under the circumstances, the coming months could be pivotal, adds NBC analyst Jason Marczak: Chile, Peru, Honduras, Nicaragua and Ecuador are all set to hold presidential elections this year. Furthermore, with severe lockdowns devastating the region’s economies and largely failing to slow the spread of the virus, the region’s political class as a whole has watched approval ratings plummet. In an increasingly hostile political landscape, those fighting to defend democratic institutions could face growing pressure from outside challengers.

Unless the country’s moderate leaders forge a united front to shore up their democratic institutions, Brazil risks an even more dangerous meltdown than the dramatic events in Washington last week. The conditions for democratic reversal are in place—a leader scornful of democracy and disdainful of civil society, a group of hardcore supporters committed to violently resisting his opponents, and an increasingly pliant security establishment. Making matters worse, Brazil has weaker checks and balances than many other democracies to keep it from falling off the brink.

“Bidenworld thinks it wrongheaded to confine democracy promotion to three countries [the left-wing “troika of tyranny”—Cuba, Nicaragua and Venezuela],” the Economist adds. “It shares the pre-Trump consensus that the neighborhood’s stability depends on the rule of law, a strong civil society and fairer capitalism.”