The U.S. government has supported democracy for decades. While this principle has never been applied evenly—all Presidents have made compromises in the name of national security—the policy paid off with the end of communism and toppling of dictatorships around the world, notes David J. Kramer, senior fellow in Florida International University’s Vaclav Havel Center for Human Rights and Diplomacy.

But freedom is not inexorably sustained; it requires steadfast commitment and sacrifice. And as Freedom House has amply documented, democracy has slipped during the past 13 years, with a steady decline in the number of democracies worldwide and an erosion of political liberties in democracies once thought stable, he writes for The American Interest:

The United States is not responsible for this erosion, but it hasn’t always helped. The war in Iraq tainted the cause of democracy promotion for many, who came to associate it with open-ended war and quixotic attempts at regime change. By 2009, only 21 percent of Americans thought promoting democracy should be a top priority of U.S. foreign policy. Perhaps overlearning this lesson, the Obama Administration was often marked by passivity toward autocratic regimes, especially Iran and Syria. Even so, both Bush and Obama administrations incorporated democracy assistance as a core policy during their terms. 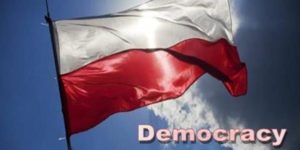 But recent developments in Ukraine appear to be reversing the cultivation of democratic values, threatening “to undermine every U.S. and European program in the region, every diplomatic and educational initiative, every single ideal that the United States has ever stood for in that part of the world,” writes Washington Post analyst Anne Applebaum, a board member of the National Endowment for Democracy.

The new global competition is not between democracy and authoritarianism, but between between different types of capitalism, according to a new analysis.

In his latest book Capitalism, Alone, former World Bank economist Branko Milanovic explains why capitalism no longer has competitors. China’s economy is now 80 per cent private sector-owned, versus 50 per cent in the late 1990s and zero per cent before it began its reforms in 1978, the FT’s Edward Luce writes

The new global competition, Milanovic argues, is between different types of capitalism. This he divides into two: the west’s “liberal meritocratic capitalism” versus China’s “political capitalism”. Each is beset with its own problems. China’s model is undemocratic and must generate high growth rates to maintain its legitimacy. Meanwhile, in most of the west, meritocracy is failing. For the first time, the top 0.1 per cent in America now own the same amount of wealth as the bottom 90 per cent (at 22 per cent of national wealth and 22.8 per cent respectively).

The closer one looks, the more it appears that Milanovic’s two types of capitalism are merging,” Luce adds. “The west’s claims to meritocracy look increasingly hollow, while China’s promise of eternal growth must surely be coming to an end. What we do know is that there is growing equality between nations and growing inequality within them. No system, whether liberal or illiberal, can tolerate plutocracy indefinitely.”

“As long as capitalists used most of their surplus income to invest rather than to consume, the social contract held,” writes Milanovic.

How liberal democracy needs to adapt and change if it is to survive; how we can bridge the ethnic, national and religious chasms that seem only to grow wider with every crisis; how democratic societies should address the ever-greater concentration of wealth in the hands of the very few; how we can manage the dangers of new media without curtailing its benefits and its freedom. These are some of the questions addressed at the annual Athens Democracy Forum gathering in Greece, the New York Times reports. The discussions feature in World Review: The State of Democracy, a special section that examines global policy and affairs through the perspectives of thought leaders and commentators.