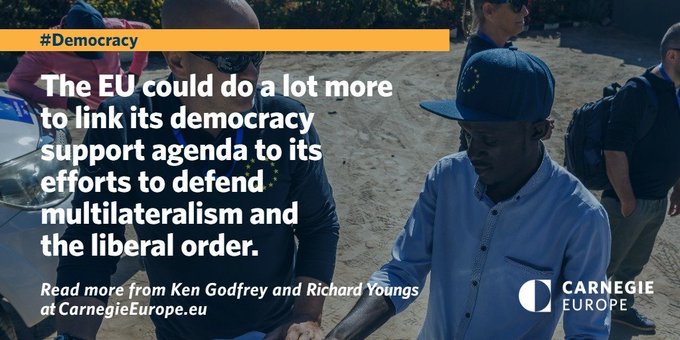 With protests raging in Hong Kong as well as in autocratic countries like Algeria and Egypt, and anti-democratic strongmen multiplying across the globe, the European Union is facing greater pressure to step up and shout more loudly about the liberal democratic values it professes to hold dear. If Europe doesn’t, who will? Berlin-based journalist Noah Barkin writes for The Atlantic:

Heather Grabbe, director of the Open Society European Policy Institute in Brussels, told me that there were two schools of thought within the EU about how to tackle democracy promotion in an era of strongmen like Trump, Vladimir Putin, and Xi Jinping. “The first is that you double down, you use the institutions to actively promote democracy, and you hope that we get through this challenging period,” she said. “The second is that you pull in your horns and don’t talk too much about democracy anymore.”

“What we’ve been seeing in Europe over the past decade is a substantial toning down of the rhetoric on democracy,” said Rosa Balfour, a senior fellow at the German Marshall Fund in Brussels. “At the highest political levels, the approach has become very cautious and careful. There is real demand out there for the EU to speak loudly. But it’s not happening.”

The EU is due to agree a new democracy strategy. But despite all its rhetoric about human rights and democracy being core values, the Union spends only around 0.1 percent of its budget on upholding these internationally, according to Ken Godfrey, the executive director of the European Partnership for Democracy, and Richard Youngs, a senior fellow in the Democracy, Conflict, and Governance Program, based at Carnegie Europe. The EU has been equivocal in fighting democratic regression, they observe: 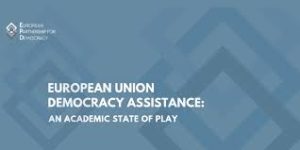 It has used sanctions in relation to security concerns (Russia, Syria) but increasingly recoils from using such measures to press for democracy. In those cases where the EU has adopted critical measures, these have usually been fairly circumscribed. … A new human rights sanctions mechanism is being considered, but this is not likely to cover broader democratic reversals.

Instead, the union has actually deepened cooperation with regimes that are heading firmly in a more authoritarian direction. In a large number of such countries, the EU has either signed or is offering new trade and aid agreements, while dampening any critical edge to its policy—examples include Azerbaijan, Belarus, China, Cuba, Egypt, Kenya, and Vietnam. 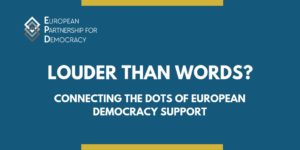 The EPD’s participatory review – Louder than words? Connecting the dots of European
democracy support – draws on consultations with key stakeholders and case studies of Armenia, Honduras, Tunisia and Zimbabwe – to assess European democracy support’s achievements (past), what can be improved today (present) and where it should be headed (future), concluding with five key recommendations:

Taking practical steps toward a more effective Common Foreign and Security Policy (CFSP) must become a top concern for the EU in its next political-institutional cycle, says analyst  Jana Puglierin. Although the list of foreign policy challenges for the EU is long, four crucial areas stand out because they shake the very foundations of European foreign policy, she writes for the German Council on Foreign Relations (DGAP). In these areas, Europeans have only two options: collective empowerment or autonomous decline. They are:

If the EU doesn’t make democracy a core of how it defines its geostrategic interests and fundamentally rethink the way democracy fits into its overarching foreign policy, the new strategy will make little difference, Godfrey and Youngs add. And the incoming EU leadership will continue the union’s drift into democratic agnosticism. RTWT