Globalization and democratization were supposed to mellow China and Russia and help them fit easily into the U.S.-led order. That hasn’t worked out as well as hoped, but that’s not necessarily due to the foreign policy establishment, note analysts Hal Brands, Peter Feaver, and William Inboden.

During the Obama administration, Deputy National Security Adviser Ben Rhodes (above, author of The World As It Is) derided it as “the Blob,” and others have since joined him, note analysts Hal Brands, Peter Feaver, and William Inboden. But contrary to realist John Mearsheimer’s prediction in 1990 that “We will soon miss the Cold War…. The prospect of major crises, even wars . . . is likely to increase dramatically,” the post-1989 era hasn’t turned out too badly. 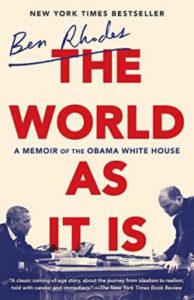 Have there been disappointments and even disasters along the way? Absolutely. But, in short, after 1989, the deep global engagement favored by the Blob kept the world moving forward on a generally positive track, rather than regressing to the historical mean of tyranny, depression, and war, they write for Foreign Affairs:

German and Japanese revisionism never materialized—because those countries remained tightly embraced within a strong U.S. alliance system and a broader liberal international order. An outbreak of nationalism and ethnic aggression was contained in the Balkans. The countries of the former Warsaw Pact did not descend into chaos but embarked on political and economic reform, relaxing into a newly secure environment inside NATO. Asia did not collapse into vicious rivalries; under U.S. guidance, it continued its remarkable post-1979 stretch of peace as billions of people benefited from decades of sustained economic growth. The number of democracies in the world rose dramatically.  RTWT