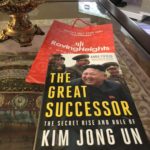 South Korea is downplaying the disappearance of North Korean dictator Kim Jong Un.* The minister in charge of relations with the North says Mr Kim is in all likelihood taking precautions against the coronavirus (of which North Korea still claims to have no cases). However, points out Andrei Lankov of Kookmin University in Seoul, given that the South Korean government is still eager for detente with the North, it may be reluctant to advertise unusual goings-on, the Economist reports:

The normal difficulty of discerning what is happening, Mr Lankov adds, is compounded by the closure of the North’s border with China to ward off covid-19, which has further reduced the flow of information. Cheong Seong-chang of the Sejong Institute, a think-tank, says: “The fact that he isn’t showing his face in public suggests there is something wrong with his health, though it’s probably not as serious as some people claim.” RTWT

For expert background, check out the Kim Jong Un biography (above) by Anna Fifield @annafifield

*As first reported by Daily NK, a partner of the National Endowment for Democracy (NED).