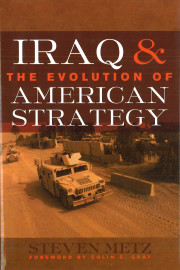 Democratization is no longer treated as the key to victory over jihadism or violent extremism, argues Steven Metz, the author of “Iraq and the Evolution of American Strategy.”

“Throughout the Obama administration, [President George W.] Bush’s idea of winning the struggle against violent jihadism by promoting democracy slowly faded, and it has all but vanished under Trump,” he writes for World Politics Review:

The U.S. shifted to a less ambitious strategy concentrated on weakening jihadist groups, primarily al-Qaida but also its affiliates and offshoots like al-Shabab and later the so-called Islamic State. This remained a multipronged effort that included making it harder for extremists to fund themselves, helping allies and partners, and undertaking direct strikes, often with airstrikes and drone attacks. President Barack Obama at least continued to mention promoting democracy to undercut extremism, but outside of the initial years of America’s intervention in Afghanistan and the war in Iraq, little was actually done.

Despite efforts to tackle this issue, the number and severity of jihadist attacks have increased in recent years, prompting governments to enact new measures against terrorism as well as the underlying ideology of Islamic extremism that seeks to impose a specific interpretation of Islam, according to Existing Measures Against Islamic Extremism, a recent report from the European Values network.

At the same time, political leaders, security professionals, and voters in electoral and minimalist democracies can expect to reap greater safety from improved democratic quality, according to Amichai Magen, head of the Diplomacy and Conflict Studies Program at the Lauder School of Government, Diplomacy, and Strategy of the Interdisciplinary Center (IDC) in Herzliya, Israel.

Multiparty autocracies—and external actors backing their liberalization—need to prepare for a curvilinear effect in which liberalizing authoritarian regimes will suffer increased incidents of terrorism unless and until they manage to get “over the hump” by attaining levels of democratic quality high enough to push terrorism back down, he writes for the NED’s Journal of Democracy. Closed autocracies, meanwhile, appear to have lost much of the antiterrorist advantage that they may have once enjoyed, adds Magen, a senior researcher at the International Institute for Counter-Terrorism (ICT).

Germany’s 2016 Strategy to Prevent Extremism and Promote Democracy, for example, claimed to be the first “harmonized strategy for the national optimization of the prevention of extremism,” stressing the cooperation of actors on federal, state and local levels and focused on locations crucial for the prevention of extremism and the promotion of democracy, including on the internet, the report adds.

Ultimately, lasting stability must be driven from the ground up rather than the top down, argued Scott Mastic, vice president for programs at the International Republican Institute, a nonprofit democracy assistance group affiliated with the National Endowment for Democracy. By pursuing a smart foreign assistance approach that supports citizens in the development of representative and accountable institutions, we can help countries build resilience to violent extremism, and in doing so, create a more stable region consistent with U.S. interests, he wrote for The Hill.

“Perhaps the U.S. could have transformed the political culture of the parts of the world that gave birth to violent jihadism and promoted democracy, as the Bush strategy called for. But the costs of doing so would have far exceeded the security that American gained.”