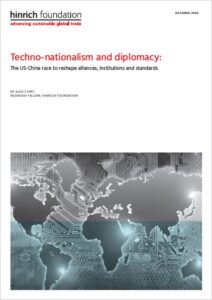 The spread of China’s “techno-authoritarianism,” its pursuit of the “innovation advantage,” and its incompatibility with the liberal democratic model is the focus of a new report. The underlying dynamics and tensions between markets, non-state actors and governments are compelling governments to pursue strategic alliances and partnerships, and the inherent ideological differences between the Chinese system and those of open market, liberal democracies will influence outcomes, argues analyst Alex Capri.

The linkage of technology to fundamental ideological values has become a defining issue in the global technology landscape. The authoritarian use of data and artificial intelligence (AI) to conduct censorship, surveillance and mass monitoring of populations is in direct conflict with democratic standards regarding privacy and freedom of expression, he writes for the Hinrich Foundation:

Beijing’s imposition of the national security law in Hong Kong as well as its internment of ethnic Muslim minorities in China’s western Xinjiang autonomous region were just several of the latest provocations causing European policy makers to rethink relations with China. Thus, for Beijing, it has become increasingly difficult to find sympathy in Europe regarding Washington’s
campaign to crush Huawei….New partnerships, including the Global Partnership on Artificial Intelligence* (GPAI) and the G7 AI Initiative, that are designed to guide the liberal and transparent development of AI, stand in contrast to China’s export of techno-authoritarianism.

Coalition of the willing?

The Clean Networks program, that seeks to expunge Chinese technology from carrier networks, data storage, mobile apps, cloud networks and undersea cables, has created an existential crisis for Chinese companies, which  are increasingly viewed as de facto proxies of the Chinese Communist Party (CCP), Capri adds. In the broader context of a US-China technology cold war, Chinese companies’ linkage to Beijing has relegated them to the status of malign actors.

A question that has begun to circulate in trade policy circles is: could a coalition of willing nations form a new global trade institution with standards that require open market principles and democratic ideals? RTWT

*The subject of a recent report from the NED’s International Forum.

In “Artificial Intelligence and Democratic Norms,” the fourth in the  “Sharp Power and Democratic Resilience” series from the International Forum for Democratic Studies, Nicholas Wright explores how to establish democratically accountable rules and norms that harness the benefits of artificial intelligence-related technologies, without infringing on fundamental rights and creating technological affordances that could facilitate authoritarian concentration of power.