The spread of Chinese firms like Tencent, Alibaba and Baidu raises concerns that the Chinese model of digital authoritarianism is creeping abroad, putting the future of the Internet at risk, notes analyst Nithin Coca. The D.C.-based Council on Foreign Relations says China’s policies, including censorship, data localization and its onerous privacy rules, are “meant to undercut foreign competitors and boost Chinese companies,” with censorship being key tool, he writes for the Washington Post:

A 2017 report from the European Center for International Political Economy found that China “blocks not just politically sensitive content, but also the majority of foreign commercial platforms and intermediaries.” A report released last month by the Information Technology and Innovation Foundation rated China as among the worst countries for digital protectionism, highlighting a newly passed standardization law it said “could be used to favor local tech firms and their products.”

A report from the Royal United Services Institute shows how the Chinese authorities systematically control foreign academic and media discussion and turn economic ties to their political advantage, Edward Lucas writes for the London Times.

The boundary between influence (legitimate) and interference (unacceptable) in another country’s affairs is hard to define, the report states. Unlike Moscow, Beijing’s interference is not aimed at subverting the West, but represents a rigorous, ruthless advancement of China’s interests and values at the expense of those of the West, including through actions which encourage self-censorship and self-limiting policies, says Charles Parton OBE, a RUSI Senior Associate Fellow.

One thing is unchanging: the Party’s foremost consideration is remaining in power. Thus, the CCP’s priority is to avoid instability and unrest, which might lead to its being unseated, he contends. Domestically, the process of legitimising one-party rule is based on:

In foreign affairs, to legitimise its rule the CCP seeks to convince its people of its success in: 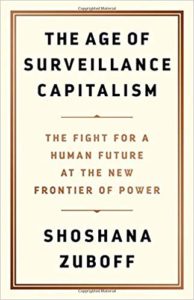 What you see in China is the marriage of authoritarian state with instrumentarian power, says Harvard Business School professor Shoshana Zuboff, author of The Age of Surveillance Capitalism: The Fight for a Human Future at the New Frontier of Power. And that is a very dark and dangerous endgame, she tells New York magazine:

Global press freedom watchdog Reporters Without Borders announced on Monday that it will release a report to raise awareness of Beijing’s ongoing campaign to influence world media in forging a positive image of China.

Policymakers expect the EU parliament elections to be the target of fake news and other disinformation, the Financial Times reports:

EU leaders in December called for “swift and decisive action” to uphold the integrity of elections, backing proposals from the European Commission for an early warning system to spread the word about fake news and so speed up rebuttals by public authorities. But the message from the new prime minister of Latvia, one of the countries on the frontline of the struggle against such misinformation campaigns, is bleak.

“Democracies are always vulnerable”, says Krisjanis Karins. “But the antidote is education…we have to understand that our society is being attacked.”

It is to reclaim the online public space from the disinformation monster, adds Rappler.com (right).

China could be using Taiwan as a testing ground for disinformation campaigns, reports suggest:

Government agencies and civil initiatives – like the collaborative fact-checking platforms Cofacts, Rumor & Truth and Mygopen – attempt to identify disinformation. Government agencies are quick to issue debunking messages when they detect false items on open systems. Cofacts, which has more than 800,000 users, has become expert at infiltrating closed groups such as those on the Line system, where close to 60,000 users have added Cofacts to their closed groups so it can monitor messages. More than a third of the messages it checks contain falsehoods.

When operating abroad, the CCP regime advocates the ideology of “Chinese characteristics,” meaning communism, and offers powerful economic incentives as a lure to have the people of the free world let down their guard, abandon moral principle, and turn a blind eye to the CCP’s vast abuses of human rights and its persecution of religion, the Epoch Times adds:

In December 2017, the National Endowment for Democracy (NED) stated in its report Sharp Power: Rising Authoritarian Influence that the Chinese Communist Party is influencing and changing Australian politics and academia by means of bribery and infiltration for the main purpose of weakening the U.S.-Australia alliance.

Over the past year Beijing has invested billions into countries across the region, such as Cambodia, and emboldened them to demolish opposition media, the Guardian adds.

“Several south-east Asian governments are seeing China’s authoritarian regime as a model, while others are getting direct support for surveillance and censorship technology from China,” said Matthew Bugher, head of the Asia programme at Article 19, the anti-censorship group.

A major reason for pushing the Chinese Communist Party’s ‘six legitimacies’ abroad is that foreign support and approbation for the Party’s achievements and policies can be played back into China, thereby reinforcing the CCP’s exercise of power, RUSI’s Parton argues. Reinforcing the ‘six legitimacies’ leads the CCP into foreign interference in four broad areas:

In particular, the CCP wishes to control Chinese citizens living abroad, such as students, academics and businessmen, and seeks, where possible, to prevent them from being exposed to ‘unhealthy’ ideas and ideals they might bring back to China, Parton adds. However, the effects of this are not confined to Chinese abroad; they are also deleterious to the values, interests and security of liberal democracies. RTWT