Russia is already beginning to interfere in the 2018 midterm elections and the U.S. is ill-prepared to combat it, according to Secretary of State Rex Tillerson. He raised the alarm about new Russian meddling in an interview with Fox News on Tuesday in Bogota. In an earlier stop in Mexico, he advised Mexican officials to be on guard for Russian interference in their elections scheduled for July, reports suggest:

Asked about how prepared the U.S. is now compared to the 2016 elections, which experienced massive Russian meddling, Tillerson said, “I don’t know that I would say we are better prepared, because the Russians will adapt as well.”

“The point is, if it’s their intention to interfere, they are going to find ways to do that,” he told Fox News. “We can take steps, but this is something that, once they decide they are going to do it, it’s very difficult to pre-empt it.”

None of those have taken hold, but the flurry of new efforts indicated to Bret Schafer, an analyst for the Alliance for Security Democracy, which runs Hamilton 68, that the Russians would continue to push issues related to the “deep state.” “There’s still a ton of activity,” Schafer said. “It does look like they’re looking for the next hashtag. … They’re clearly looking for the next step in this process.”

A new study restores some clarity to what “fake news” actually represents, The Washington Post reports:

Researchers at Oxford University’s Internet Institute spent 18 months identifying 91 sources of propaganda from across the political spectrum on social media, which spread what they deemed “junk news” that was deliberately misleading or masquerading as authentic reporting. They then did a deep analysis of three months of social media activity in the United States, studying 13,477 Twitter users and 47,719 public Facebook pages that consumed or shared this fake news between November 2017 and January 2018. What they found was a profound imbalance.

“Analysis showed that the distribution of junk news content was unevenly spread across the ideological spectrum,” the institute said in a news release.

Authoritarian regimes are using a broader and more aggressive set of tools to advance their interests, including various forms of electoral espionage, the hacking of politicians and political parties, and the dissemination of misinformation and fake news — all designed to skew electoral outcomes, discredit democratic systems and undermine democratic discourse, notes Kenneth Wollack, President of the National Democratic Institute, a core institute of the National Endowment for Democracy.

Repressive regimes are using what we call “distributed denial of democracy” attacks to pollute new media channels with disinformation, making new media less useful as a mechanism for legitimate discourse. These misinformation campaigns use troll farms and botnets to amplify certain stories on new media, he told a meeting to mark the 10th Anniversary of Georgetown University’s Masters Program in Democracy and Governance. 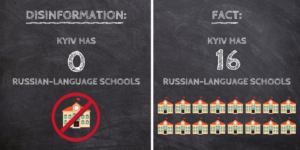 To prepare for these future attacks on democracy – and indeed, even attacks from within – we must think beyond Russia to the key actors in the democratic process: people, notes Nina Jankowicz (@wiczipedia), a 2017 George F. Kennan Fellow at the Wilson Center’s Kennan Institute and an expert on Russian disinformation.  Some members of Congress, in attempting to move the disinformation discussion away from the partisan rancor that has often characterized it, have warned that responding to this challenge is really about defending our democracy. They are absolutely right, but the policies that have resulted from these discussions are almost entirely directed at Russia, she writes for The Wilson Quarterly:

Our best defense against hostile influence, whatever its vector, is to invest in critical thinking skills at all levels of the population so that outlandish claims are seen for what they truly are: emotional exploitation for political or monetary gain. Fringe outlets like the Czech Republic’s Parlamentní Listy existed before Russia exploited the arguments on their pages, and they will continue to grow and thrive unless deprived of the oxygen that first enabled them.

Elections are just one target of opportunity, notes FDD’s Clifford D. May:

Russia’s networks, Mr. Fly and Ms. Rosenberger write in the Democracy Journal, have been using social media to heighten tension in a range of controversies. One example: Reasonable people may differ over whether Confederate statues, in Charlottesville and elsewhere, should remain or be removed. The mission of Russian disinformation operations: Make this a fight between neo-Nazis on one side and Antifa thugs on the other.

In order to deepen cooperation between Ukraine and the United States, greater information sharing between the two allies is needed, said Laura Galante, senior fellow in the Atlantic Council’s Cyber Statecraft Initiative. She emphasized the need for not only technical information regarding how the attack was conducted, but a deeper level of analysis which could reveal motivation and contribute to attribution. For example, analysis of an early attack by Russian actors revealed the language settings of a particular malware were in Russian and timestamps throughout the attack showed periods of activity between 9 a.m. and 5 p.m. in Russia. “This is intelligence analysis,” she told a recent ACUS conference.

“We have to dig under why these influence tools are being used to understand how to counter them,” said Galante.

Charles Davis, writing for The Daily Beast, finds that Redfish, a new “Berlin-based media collective, launched with a promise to deliver ‘radical, in-depth grassroots features’” is actually run by staff who last worked for Russian government media…. And a new digital content platform that is registered to RT’s parent company entitled “In the NOW” is targeting millennials and has more followers than RT America, France, Deutsch, and U.K. combined. DFR Lab describes how the channel’s content frequently promotes a pro-Kremlin agenda, including with its recent piece that accuses “the international community of failing to give Moscow the credit for ‘destroying ISIS.’” (The Daily Beast, DFR Lab)

The Presidential elections in the Czech Republic are over, with the Kremlin’s ally, Miloš Zeman, winning his second five-year term. You can read about the details of the Kremlin’s influence on the Czech election in the new Kremlin Watch Report.