Social media has become a hotbed of extremism, used to undermine democracy, a think-tank said on Wednesday, calling for reforms to restore trust in government and banish fringe elements, The New York Times reports:

The Kofi Annan Commission on Elections and Democracy in the Digital Age said in a report that unchecked by regulators or operators, political parties, candidates, consultants, and foreign agents have used social media as a weapon. The think-tank outlined a long list of proposals that would place government and industry checks on social media firm and would also require them to strengthen their internal controls.

“Disinformation has been weaponized to discredit democratic institutions, sow societal distrust, and attack political candidates,” the report said. Members from the Kofi Annan Commission joined a panel discussion and Q&A on January 16, 2019, moderated by Francis Fukuyama (right), Director of the Center on Democracy, Development, and the Rule of Law (CDDRL), on the opportunities and challenges for electoral integrity created by technological innovations (see above).

The democratization of technology is one of several factors contributing to America’s declining ability to shape global affairs by creating a more level playing field for states and nonstate actors alike, a new @StimsonCenter analysis contends.

The principal feature of the foreign policy landscape in this century is America’s declining ability to shape global affairs. American power, per se, has not declined; rather others have risen, argues Gordon Adams, a Distinguished Fellow at the Center:

China, Russia, India, Iran, Turkey, for example, are stepping away from the rules and institutions of the past 70 years, acting increasingly on their own and pursuing their own interests.  While the current administration has accelerated trends long under way, the decline of America’s influence is the result of policies that reduce America’s influence, broad changes in global economic growth, and the democratization of technology. These factors, and others, create a more level playing field for states and nonstate actors alike and are changing the “rules.” 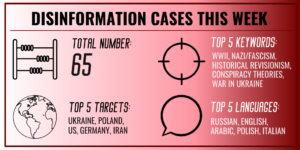 While the open cyberspace has allowed the democratization of certain processes and increased access to information and data, growing opportunities for promoting falsehoods (accidentally and deliberately) have resulted in a gradual erosion of trust in media, social networks and even governments, says the World Economic Forum’s Global Risks Report 2020.

In an attempt to cover up inconvenient facts regarding Russia’s complicity with Nazi Germany, pro-Kremlin outlets try their best to dominate the media sphere with narratives that fit the Kremlin’s worldview, the East Stratcom Task Force’s the Disinformation Review reports. One of those is the claim that the USSR had absolutely no part in creating the preconditions that allowed Nazi Germany to start the war.

An #opinion piece on digital #disinformation in @TheEconomist  offers a new slate of possible solutions to the destabilizing effects of misinformation, @NDIparties adds.