Liberals are supposed to believe that the freedom to dissent is an essential part of a functioning democracy. More points of view lead to a better grasp of complex problems. Liberals believe that the price of that freedom is the tolerance of ideas we may find self-evidently wrong, or even odious, notes analyst Matt Bai.

Ezra Klein, the founder of Vox, recently tweeted: “A lot of debates that sell themselves as being about free speech are actually about power.” I’m not sure any Soviet-era autocrat could have made the case against liberal democracy more succinctly than that, he writes for The Post:

We in the media should make sure all sides of this debate are heard. But when we allow the cultural left to refer to itself as a “liberal” or “progressive” movement, we do a profound disservice to generations of political activists who stood up for a decidedly different set of principles. Those words get their meaning from a century of tolerance and dissent. 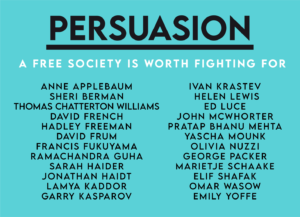 If the values of a free society are to thrive in the 21st century, they need to retain their appeal across the globe, says Yascha Mounk. He discusses the global prospects for liberalism (above) with three international members of Persuasion’s Board of Advisors: Denise Dresser, Ivan Krastev, and Pratap Bhanu Mehta.

“The erosion of faith in liberal values …reinforces the weakening of the West and aggravates internal discord,” National Endowment for Democracy President Carl Gershman told the State of the World 2018 panel on The Future of Democracy of Human Rights.

In a July 7 open letter in Harper’s Magazine, over 150 public intellectuals attested that American cultural institutions were facing “a moment of trial” in the court of public opinion, the Thomson Reuters Institute observes:

Despite acknowledging a much needed “reckoning” of social justice and police reform, each individual decried a “new set of moral attitudes and political commitments” poised to “weaken…open debate and toleration of differences in favor of ideological conformity.” Free speech, it appears, no matter how problematic or incendiary, is being “constricted” by a rising tide of intolerance and retribution toward any and all contrarian perspectives.

At a forthcoming seminar (see below), participants are invited to share their thoughts on how a rapidly evolving social landscape purports to threaten “liberal” democracy.

Darkness has indeed claimed democracy. We’ve seen where the real threat to freedom lies: a climate of ideological intolerance in our nation’s cultural institutions that suffocates any attempt to question it, Gerard Baker writes for The Wall Street Journal.