As someone with extensive personal experience with the suppression of debate by ideological conformity, I’m happy to see names from all over the political spectrum signing this open letter about its rise in the free world. https://t.co/Sv8ANb46OW

The restriction of debate, whether by a repressive government or an intolerant society, invariably hurts those who lack power and makes everyone less capable of democratic participation. The way to defeat bad ideas is by exposure, argument, and persuasion, not by trying to silence or wish them away, according to the signatories of A Letter on Justice and Open Debate, published in the latest issue of Harper’s Magazine. Our cultural institutions are facing a moment of trial, they suggest: 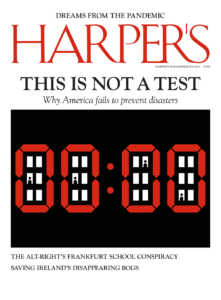 The free exchange of information and ideas, the lifeblood of a liberal society, is daily becoming more constricted. While we have come to expect this on the radical right, censoriousness is also spreading more widely in our culture: an intolerance of opposing views, a vogue for public shaming and ostracism, and the tendency to dissolve complex policy issues in a blinding moral certainty. We uphold the value of robust and even caustic counter-speech from all quarters. But it is now all too common to hear calls for swift and severe retribution in response to perceived transgressions of speech and thought.

Powerful protests for racial and social justice are leading to overdue demands for police reform, along with wider calls for greater equality and inclusion across our society, not least in higher education, journalism, philanthropy, and the arts, say the signatories, including several associates of the National Endowment for Democracy (NED), including Anne Applebaum, Francis Fukuyama, Journal of Democracy contributors Sheri Berman, Persuasion’s Yascha Mounk and Garry Kasparov (above) of the Renew Democracy Initiative.

But this needed reckoning has also intensified a new set of moral attitudes and political commitments that tend to weaken our norms of open debate and toleration of differences in favor of ideological conformity. As we applaud the first development, we also raise our voices against the second, they assert. RTWT

In the USSR, it wasn’t only the Party censors who limited what writers wrote, it was every writer knowing in advance what they could and could not say, and what would happen to them if they erred, Kasparov tweeted. Fear is the greatest censor of them all.