Even the toughest critics of Angola’s government say that in just more than a year, President Joao Lourenco has accomplished more to stop corruption than any previous Angolan administration, VOA reports:

Lourenco took power last September after the retirement of longtime president Jose Eduardo dos Santos, whose cronies and family members are alleged to have controlled every important company and source of wealth in the country. But in the year since the transition, Lourenco has swept away an impressive number of allegedly corrupt top officials who, under dos Santos, were considered untouchable. Most notably, the ex-president’s son Filomeno, who ran the nation’s sovereign wealth fund, was arrested this week on allegations of money-laundering, embezzlement, and fraud.

“I would give Lourenco an eight out of 10, simply because he inherited a country where corruption was so ingrained, so institutionalized, that it became the institution itself,” said Rafael Marques, a journalist and human rights activist who was put on trial for his corruption exposés during the dos Santos era. “The government itself was corruption. I think he’s done that with – and deserves great credit for – what he’s done in terms of also letting the judiciary have the power to indict and arrest some of these most notorious, corrupt officials.”

What happens in Angola matters. Though inequality is entrenched, it is an upper middle-income country with a gross domestic product of about $125bn, six times the size of Zimbabwe’s, the FT’s David Pilling reports:

It produces 1.7m barrels of oil a day, making it the world’s eighth-largest exporter. Reserves, which have been dwindling, could rise again if Mr Lourenço persuades multinationals to step up their investment. Angola is also a locus of the new “scramble” for Africa, a country where China has made huge inroads. In the past three years alone, Angola’s debt has ballooned by $23bn, much of it money from Beijing. Mr Lourenço has shown signs of wanting to tilt back to the west, repairing relations with western oil companies and seeking help — and therefore scrutiny — from the IMF.

“Still, there are reasons to pause,” Pilling adds. “As with China’s president Xi Jinping, Mr Lourenço may be motivated more by consolidating power and shoring up the ruling party than by a genuine overhaul of the political economy.” 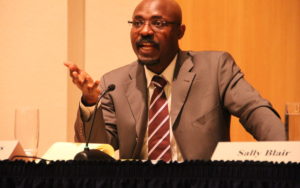 Extensive whistleblower reports published by Maka Angola have led to numerous investigations and prosecutions across the globe to bring to justice all those who illicitly enriched themselves during the Dos Santos years. But efforts to repatriate the missing billions have been complicated by the tortuous schemes devised by the principals to obscure the money trail, investigative journalist adds Morais, a former Reagan-Fascell Democracy Fellow at the National Endowment for Democracy, during which time he worked on a book, Blood Diamonds: Corruption and Torture in Angola, about systematic human rights abuses against workers in Angola’s diamond mines:

One such example: Back in 2009, an Angolan company named Portmill Investimentos e Telecomunicações S.A. allegedly committed fraud in its acquisition of a majority shareholding in the Banco de Espírito Santo Angola (BESA). BESA was the Angolan subisdiary of one of Portugal’s oldest private banks, the Banco de Espírito Santos (BES). By 2009 BES was already struggling under the weight of toxic debt, much of it related to bad loans made by its Angolan subsidiary. It sold 24% of the 75.94% stock it owned in BESA to Portmill for the sum of US $375 million dollars.

But documentary records handed to Maka Angola show conclusively that Portmill did not pay US $375 million for the 24% parcel of BESA stock from earned income, as the firm claimed in evidence to Angolan prosecutors, Morais adds. RTWT

For the time being, it remains unclear whether Lourenço’s actions represent an end to the country’s kleptocracy, observers suggest, or if it is merely being reshaped under the helm of the new leader.