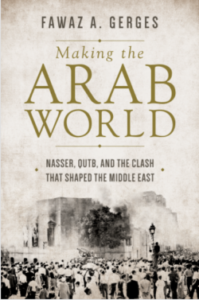 On the five-year anniversary of Egypt’s Rabaa massacre, some human rights groups say the country has not done enough to address the human rights issues demonstrated in the killing, RFE/RL reports:

The Rabaa massacre was an attack in Cairo on supporters of ex-President Mohamed Morsi who were conducting a sit-in in the nation’s capital. A month earlier, Morsi had been ousted in a military coup. On July 3, 2013, current general-turned-president Abdel Fattah el-Sissi led the coup against Morsi, Egypt’s first freely elected civilian president. According to the Human Rights Watch, 817 civilians were confirmed killed, but it is likely that at least a thousand died.

“The Egyptian authorities’ repeated failure to respect the rights of protesters, and their failure to hold anyone accountable for mass murders, has contributed to an environment in which the security forces feel empowered to violate human rights with absolute impunity,” said Najia Bounaim, North Africa Campaigns director for Amnesty International.

Gamal Abdel Nasser’s revolution marked a watershed moment in Egypt’s modern era, notes Brookings analyst Shadi Hamid. At its outset, the dueling ideologies of Islamism and secular nationalism were uncertain and still in flux. But they would soon come to define the seemingly intractable political conflict within not just Egypt but also the broader Arab world.

In the 1950s and 1960s, the contest played out in part through the bitter rivalry between two of the period’s most memorable personalities: Nasser, on the one hand, and the famed Muslim Brotherhood ideologue Sayyid Qutb, on the other. In Making the Arab World, Fawaz Gerges traces the intertwining biographies and intellectual trajectories of these two titans of Egyptian history, he writes for Foreign Affairs:

The ideological currents unleashed by Nasser and Qutb are now part of the fabric of the modern Middle East. The struggle between their inheritors continues, and one side is not likely to conclusively defeat the other. But that won’t stop partisans, ideologues, and autocrats from continuing to try. The Egyptian regime, for example, remains determined to crush the Brotherhood, believing that it can do today what it could not do before.

For this unfortunate reason, Making the Arab World—and its story of two impassioned, sincere, and reckless men—serves not just as an account of why one revolution went wrong in Egypt’s past but also as a warning that, for Egypt as well as the rest of the region, some of the worst may be yet to come, says Hamid, the author of Islamic Exceptionalism: How the Struggle Over Islam is Reshaping the World.

In July 2018, the U.S. Congressional Subcommittee on National Security held a hearing to examine the threat of the Muslim Brotherhood to the United States and its interests. This hearing—expected to pave the way for Congress to follow through on efforts to designate the Brotherhood as a terrorist group—has re-ignited the debate about the Muslim Brotherhood and its relationship to violence and terrorism, notes Alison Pargeter, a Visiting Senior Research Fellow at the School of Security Studies, King’s College London.

While some hot-headed elements who were either part of the Brotherhood or on its margins may have sought to fight fire with fire, there is still no concrete evidence of there being any real shift either among the base or the leadership toward adopting a violent strategy, she writes for the Jamestown Foundation:

The traditional leadership was well aware that such an approach would be suicidal, and would strip the movement of the moral authority it could still lay claim to through upholding its pacific stance and appealing to democratic legitimacy. It was also conscious of the fact that the Egyptian Brotherhood carries a particular weight as the mother branch of a transnational movement and any wrong move that could leave the movement open to accusations of violence would have major repercussions, including in the West.

The Brotherhood has been damaged by the post-2013 crackdown, but it has survived, say Carnegie analysts Nathan J. Brown and Michele Dunne, a board member of the National Endowment for Democracy. Now it appears determined to play a role when the opportunity for change next arises in Egypt, but a different role than it did last time, they wrote in a recent paper:

As of 2015, that role is vaguely conceived of as more “revolutionary,” with the movement pushing for deeper change than it did in 2011–2013. The Brotherhood might in time define its revolutionary goals more clearly, a process that is likely to be shaped partly by whether the organization continues to be isolated with only a few other Islamist groups as allies, or whether it becomes part of a broader opposition conversation that includes secular as well as Islamist groups.

The Brotherhood and the regime are locked in the same old stalemate, with neither ready at this current point to give any real ground in order to achieve national reconciliation, adds Pargeter: 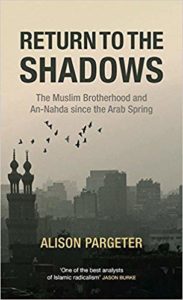 The Brotherhood is still too bruised and battered from its disastrous experience following the revolution to be able to make any real compromises. Added to this, it has a long way to go to rebuild trust with the population, adds Pargeter, the author of several books on the Muslim Brotherhood including ‘Return to the Shadows: The Muslim Brotherhood and An-Nahda After the Arab Spring’ (2016):

While the movement still has a core constituency—many of whom support it because they equate it with Islam itself—the shambolic way in which it approached power has left the impression in the minds of many, including the rest of the opposition, that it is not fit for purpose. As such, the Brotherhood is facing a stark choice. It either bows down to the regime’s conditions in order to get a toehold back in the country—something it is in no mood to do at this stage—or its faces a very long wait indeed.