In the five years since Mr Sisi came to power in a military coup, Egyptian security forces have arrested or charged at least 60,000 people, according to Human Rights Watch. Torture of political detainees has become widespread and endemic, and no opposition to the government is tolerated.

In a rare interview with CBS’s 60 Minutes, Mr Sisi appeared visibly uncomfortable, and sweated profusely in a short clip of the interview released ahead of its broadcast on Sunday. Shortly after the interview took place, CBS said it was contacted by the Egyptian ambassador and told it could not be aired.

The family of an American citizen on a hunger strike in an Egyptian prison is urging Secretary of State Michael R. Pompeo to use his upcoming Cairo trip to press for the man’s release before it’s too late, The LA Times adds:

Moustafa Kassem, a 53-year-old auto parts dealer from Long Island, N.Y., has been consuming only liquids since he was sentenced Sept. 8 — in a mass trial with more than 700 defendants — to 15 years in prison over a protest he says he had nothing to do with.

“My sense is that under the Trump administration the U.S. government has consistently raised Kassem’s case but that the administration is unwilling to threaten the overall bilateral relationship if Kassem is not released,” said Andrew Miller, deputy director for policy at the Project on Middle East Democracy and former director for Egypt military issues at the National Security Council from 2014 to 2017.

“With Kassem now on hunger strike,” he said, “his case has become more urgent and will hopefully attract more attention from both the administration and Congress.”

A source of long-standing tension between Egypt and the United States came to a close with the December 20 acquittal of more than forty Egyptians, Americans, and others convicted in 2013 of carrying out nongovernmental organization (NGO) work without government

The U.S. NGOs (including the National Democratic Institute, International Republican Institute, and Freedom House—whose program director was my husband, Charles Dunne) had been carrying out programs such as organizing electoral observation in cooperation with Egyptian institutions, including the electoral commission. But security bodies had denied their requests for licensing, and used that as a pretext to close them down in dramatic raids in December 2011.

The acquittals show that Sisi “is now taking a few steps to get himself out of the crosshairs of the U.S. Congress,” adds Dunne, a board member of the National Endowment for Democracy. “A dark reading of the December 20 verdicts might be that Sisi wanted to appease the United States in advance of a renewed crackdown on local civil society, as well as a planned revision of the constitution to extend his presidency.” 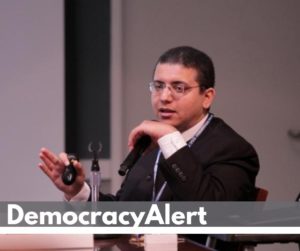 Egypt is experiencing “a crackdown on dissent and independent thought in general,” said Mai El-Sadany, the legal and judicial director at The Tahrir Institute for Middle East Policy,  pointing to cases like that of Ismail Alexandrani (right), a journalist and scholar sentenced to 10 years in prison on false news charges; Giulio Regeni, an Italian graduate student studying labor unions who was tortured and murdered in 2016 in murky circumstances; and Abdel Khalik Farouk, an economist arrested in October after publishing a book critical of the Egyptian government’s financial policies.

Civil society groups were dismayed to learn that Egyptian journalist Alexandrani’s ten-year prison sentence was upheld by a Cairo military court on December 24. Reporters Without Borders (RSF) reiterated its call for the immediate release of this journalist and academic, who specializes in the Sinai. 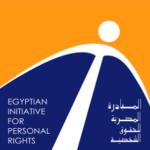 “In the face of this gross miscarriage of justice, we reiterate that Ismail Alexandrani must be released immediately & unconditionally,” The World Movement for Democracy tweeted. “Join the call to #SetThemFree & let the government of #Egypt know that the intl community will not forget about Ismail #PressFreedom.”

“After more than three years in preventive detention, more than the legal limit, a military court has imposed a long jail sentence on civilian who is a respected journalist,” RSF’s Middle East desk said.

“Nonetheless, Ismail Alexandrani did not commit any crime, aside from the crime of irritating the regime and the army by what he reported and what he wrote. We strongly condemn this iniquitous and disproportionate sentence and we call for his immediate and unconditional release.”

Egypt’s civil society could at least count on one good news item before the end of 2018, IFEX adds:

Popular blogger Wael Abbas, who blogs at Misr Digital, was finally released on 12 December after spending seven months in prison, according to RSF. His release followed that of documentary filmmaker Momen Hassan, the day before. In yet another example of how the rhetoric of national security is being used to silence critics, both Abbas and Hassan are accused of allegedly belonging to “Muslim Brotherhood media cells”. The charges against them have not been dropped. 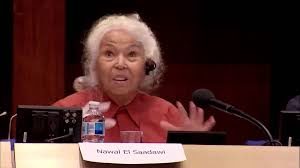 The Tunisian parliament’s bill recently agreed by the cabinet that would grant equal inheritance rights to men and women has created a furore throughout the Middle East, Qantara’s Imane Mellouk reports. But writer-activist Nawal El Saadawi says the move is “positive” and argues that Egypt should be following in Tunisia’s footsteps.

“A hundred years ago, we entered the 20th century saying the same things about equality between women and men,” she said. But now “[w]e are a hundred years behind.’

Alexandrani previously worked with the Bibliotheca Alexandrina’s Unit of Futuristic Studies and the Project on Studying Social Movements at the American University in Cairo, focusing on political activism in Egypt and the Middle East. As a writer, blogger, and civil society activist, he advocates for the political and social integration of marginalized communities across Egypt, seeking to promote a culture of human rights through informal education, solidarity campaigns, and intercultural exchange. In 2009, he was a global winner of the World Youth Movement for Democracy’s International Essay Contest on Youth and Democracy.

A nominee for the RSF’s Press Freedom Prize in 2016, Alexandrani is a research fellow at the Arab Reform Initiative in Paris and was a visiting fellow at the Woodrow Wilson Centre in Washington. He has reported for MadaMasr,Safir Arabi, Al Jazeera English, the Forum for Arab and International Relations and the French magazine Orient XXI.