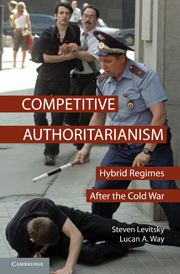 In our work on hybrid or competitive authoritarian regimes, we show how democracy can be fundamentally compromised even without obvious civil liberties violations or electoral fraud, say analysts Lucan Ahmad Way and Steven Levitsky.

Leaders can create an “uneven playing field” by using administrative powers to strengthen their party and systematically deny the opposition access to crucial resources, media or state institutions. These autocrats submit to meaningful multiparty elections — but engage in serious democratic abuse, they write for Monkey Cage:

In any democracy, elected officials have advantages over their challengers, including an easier time attracting media coverage and business support, because the government can deliver resources and policy benefits. But an uneven playing field means leaders use those advantages in ways that profoundly impair the opposition’s ability to compete.

A signature theme of the new year is the possibility of a malign confrontation between the world’s greatly enhanced capacity for electronic surveillance and the weakening of democratic control. The antidote to that risk is the democratic spirit and civil freedoms – both of which are suffering world-wide. These are not dead, but they are unwell, at times untended, notes John Lloyd, co-founder of Oxford University’s Reuters Institute for the Study of Journalism:

The world’s two most populous states, China and India –together, around 37 percent of the global population – have rolled out nationwide digital systems of monitoring and classification….China’s “social credit system” combines face, voice and fingerprint recognition technology with monitoring of public and private behavior such as internet use, educational choices and social networks.. The official Party description of the system claims that it “will allow the trustworthy to roam freely under heaven while making it hard for the discredited to take a single step.” …India’s Aadhaar (“foundation” in Hindi) national identity card technology aims to be as comprehensive as the Chinese model, but is not designed to be as intrusive.

“Mature democracies, whose publics, courts, media outlets and institutions of civil society remain free and vigilant, can – with some exceptions and accidents – ensure that technological use is consonant with the need to counter threats, or secure efficiency in the public sphere,” Lloyd adds. “The predictions of democratic failure in the face of authoritarian power will come true only if publics allow it. 2019 cannot be the year of more control, but of the revival of the liberal spirit.”

Has the west experienced a shift from exporting democracy to importing illiberalism, as some analysts suggest?

Yet there are few signs democracy itself is at risk in these countries, or in others where democratic institutions are long-established, notes Brookings analyst William Galston. Although democracy, like every other form of government, is judged by results, dysfunction remains below the levels that would spark a systemic crisis.

Democracy remains on the defensive, and 2019 will be a time of testing, he writes for The Wall Street Journal. But in 2019 there are grounds for hope that the democratic recession may be slowing.

Democracy is unambiguously in retreat from some countries, such as Hungary. That is not the situation in South Asia, notes Paul Staniland, Associate Professor of Political Science at the University of Chicago. There the contradictory nature of democracy’s advance shows, above all, the importance of vigilance. Those who defend liberal democracy must do so continually, pushing back against rights-denying ideological projects, politicians who undermine institutions, and institutions that seek to escape accountability, he writes for Foreign Affairs.

In 2019, the World Movement for Democracy plans to leverage the outcomes of its past year’s activities in the following ways: