Egypt’s military leader, Abdel Fattah al-Sisi is in some ways trying to turn the clock back, restoring the six-year presidential term and exempting himself from term limits—which, by the way, he specifically promised not to do, notes Michele Dunne, senior fellow and Middle East program director at the Carnegie Endowment for International Peace.

But there are other ways in which these amendments give Sisi even more power than his predecessors, for example direct control over judicial appointments and budgets. Sisi is far more brutal than Mubarak and in some ways more than Nasser too. Human rights violations that used to be rare in Egypt—enforced disappearances, extrajudicial killings, death in prison due to torture or medical neglect—have become commonplace under Sisi, she tells Freedom House’s Arch Puddington.

Sisi is seeking “an American stamp of approval on these constitutional amendments,” said Dunne, a board member of the National Endowment for Democracy, the Washington-based democracy assistance NGO. 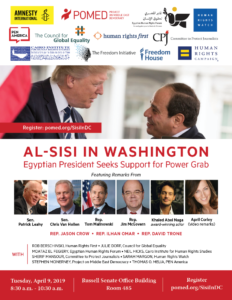 Egyptian authorities have continued to target human rights defenders and severely restrict their work in an unprecedented manner, adds Philippe Nassif, Amnesty’s Advocacy Director for the Middle East and North Africa. Our newest investigation in March found a wave of digital phishing attacks that targeted Egyptian civil society, he writes for The Hill:

The malicious attacks likely originated from government-backed bodies and involved multiple attempts to gain access to the email accounts of several prominent Egyptian human rights defenders, members of the media, and civil society organizations’ staff. The attacks  appear to be part of a wider strategy targeting critics, which began with authorities harassing civil society through an ongoing criminal investigation into NGOs and a repressive NGO law. Dozens of human rights defenders and NGO staff were investigated for “receiving foreign funding,” facing prison if convicted. Even though some human rights defenders and journalists Amal Fathy and Shawkan have been released recently, many remain behind bars or worse, disappeared. RTWT

Hosting Sissi is sending a signal that Egypt is a stable partner no matter what it does, adds Mai El-Sadany, an activist with the Tahrir Institute for Middle East Policy – “a very dangerous message to send, both to Egyptians inside the country who still believe in preserving democratic values and principles and to other – to the region – other autocrats who are watching.”

Is Sisi an irreplaceable reformer of Islam and friend of Christians? Carnegie’s Dunne asks:

Sisi is fond of positioning himself as such, but mostly he has resorted to public statements and gestures rather than significant changes to government policies, which continue to discriminate against non-Muslims. He has brutally crushed the Muslim Brotherhood as a political rival but failed to protect Christians from terrorist attacks. In fact, Sisi’s government has been more zealous than that of his predecessors in enforcing illiberal norms against atheists and LGBT citizens, among others.