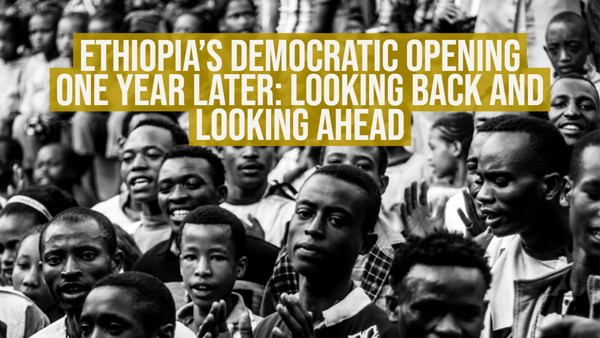 One year ago this month, Dr. Abiy Ahmed was sworn in as prime minister of Ethiopia, Human Rights Watch reports. His first few months in office saw many positive human rights reforms and a renewed sense of optimism following several years of protests and instability, along with decades of repressive authoritarian rule.

But in the months that followed, growing tensions and conflicts, largely along ethnic lines, have resulted in significant displacement and a breakdown in law and order across much of the country, threatening progress on key reforms.

Abiy’s ascent was a rare positive story in a year filled with grim news globally, notes Felix Horne, the group’s senior Ethiopia researcher. Within months of taking office, his administration released tens of thousands of political prisoners, made peace with neighboring Eritrea, took positive first steps to ensure free and independent elections, and welcomed previously banned groups back into Ethiopia. It was an astonishing turnaround in a short period, he writes for The Los Angeles Times:

But the progress has created new challenges. Ethiopia’s rapid transition away from authoritarianism unleashed waves of dissatisfaction and frustration that had been crushed by the ruling party for decades. If Abiy (Ethiopians are generally referred to by their first names) can’t maintain law and order and come up with a plan to address the causes of that anger without repressive measures, his country’s considerable gains will be threatened….

Abiy’s seismic changes are also sure to face resistance from powerful corners, especially among the Tigray minority community, who have had outsized influence and representation in government since the overthrow of Ethiopia’s military dictatorship in 1991, analyst Abdi Latif Dahir writes for Quartz:

Awol Allo, an Ethiopia observer who teaches law at Keele University in the UK, says Abiy has “inherited a dystopian nightmare” aggravated by ideological and ethnic divisions. Inter-communal clashes have, for instance, displaced over 2.9 million people across the country. The government, in order to encourage internally displaced people (IDP) to return home, has reportedly hindered relief organizations from delivering life-saving assistance. Last August, following violence in the eastern Somali region, officials resorted to an old tactic of blocking internet access to quell unrest.

“Abiy has worryingly made references to a possible return to the old ways,” Horne warns, adding “the lack of a federal response to deal with the IDP crisis and the breakdown of local governance and security is very concerning.”

Nevertheless, the sweeping changes underway in Addis Ababa should prompt the U.S. to reassess its own engagement with Ethiopia and the Horn of Africa at large, argues Daniel Benaim, a senior fellow at the Center for American Progress and a visiting assistant professor at New York University’s Program in International Relations. Whether Washington’s goal is stabilizing the Horn of Africa or competing with China, the fragile democratic transition in Ethiopia presents a clear opportunity, he writes for World Politics Review.

The United States and its allies can best support Ethiopians by continuing to offer praise for the reforms while also asking sometimes difficult questions about how Abiy’s government plans to restore law and order and address underlying grievances, and by determining what role the United States and other allies can play in making this happen, says HRW’s Horne.

“In Abiy, Ethiopia has a leader who, based on available evidence, genuinely wants that transition but may need a helping hand,” Horne adds. “The next year is likely to determine how history remembers Abiy — and how democratic principles fare in Ethiopia.”

If it succeeds, Ethiopia’s political and economic liberalization could make the country a natural and close American ally, adds Benaim, who previously served as Middle East adviser and foreign policy speechwriter to U.S. Vice President Joe Biden and Secretary of State Hillary Clinton.

“If it fails, the result could be not only a relapse into authoritarianism, but violence, instability and mass migration beyond Ethiopia’s borders,” he states. “Washington can and should work with the Ethiopian government and civil society to provide aid and technical support ahead of elections in 2020, from civic education to media training, to help create conditions for a peaceful, competitive vote.”

invites you to a discussion of current developments in Ethiopia,

featuring a conversation with

Obang Metho, Founder of Solidarity Movement for a New Ethiopia

Tiffany Lynch, Program Officer for Ethiopia at the National Endowment for Democracy