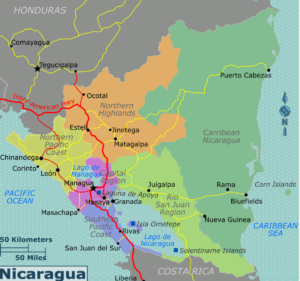 Nicaragua’s government said more than one hundred prisoners arrested during recent anti-government protests were freed (Reuters: HT-CFR) this week under a new amnesty law. Human rights groups and members of the opposition have criticized the new law, saying it also protects security forces who committed rights abuses during the pro-democracy protests.

“We repeat our call for the unconditional release of all who have been arbitrarily detained in Nicaragua,” said United States Department of State spokesman Morgan Ortagus. “The United States categorically rejects a so-called ‘blanket amnesty’ that would conditionally absolve those involved in human rights abuses and violations even while still prohibiting the exercise of basic human rights by the Nicaraguan people,” he added in a post on Restoring Fundamental Freedoms in Nicaragua.

Julio Montenegro is not celebrating the releases either, notes analyst Jake Kincaid. He bitterly opposes the plan, as do the released prisoners and their families. They say it lets the government off the hook for its own crimes, and it should admit that his clients, along with the other 700 people arrested during the crisis, were innocent. Meanwhile, more than 60,000 are in exile and fear returning to the country, he writes for Ozy’s Daily Dose:

Montenegro, along with opposition group Unidad Nacional Azul y Blanco, is demanding that a transitional justice system be put in place to prosecute and investigate crimes committed during the conflict. “That part of the story is hard to erase,” Montenegro says. “When I remember them, it fills me with a feeling — well, there is a song that says that men shouldn’t cry, but I think it is difficult sometimes with the experience we lawyers who have been close to our clients have had, living a little bit of their story.”

Regardless of the approach that the United States and the international community decide to take, one thing is certain—if they are to avoid further bloodshed and end this civil crisis peacefully, they must present a unified front in order to push back against a sitting president who has the backing of the Nicaraguan national military, police and various paramilitary groups, says R Street analyst Kristen Nyman.

The U.S. Congress should press the executive branch to impose targeted sanctions, including travel bans and asset freezes, against senior Nicaraguan government officials responsible for abuses, Human Rights Watch said this week in testimony before the US Congress.

In the context of protests against the administration of President Daniel Ortega, more than 300 people have been killed, 2,000 injured, and hundreds detained, with abuses against detainees that in some cases amount to torture, said José Miguel Vivanco, Americas director at Human Rights Watch. Nicaraguan authorities have harassed independent civil society groups and journalists, he testified before the US House of Representatives Committee on Foreign Affairs, Subcommittee on the Western Hemisphere, Civilian Security, and Trade, on the crackdown in Nicaragua.

“Human Rights Watch is extremely concerned about the lack of accountability for perpetrators of human rights violations in Nicaragua,” Vivanco said. “The US government should take a strong stance against atrocities in Nicaragua by imposing targeted sanctions on top officials who bear responsibility for egregious abuses.”