A wave of demonstrations protesting a lack of public services and government corruption have tested Iraq’s burgeoning government, while regional tensions have reached new heights, the Hudson Institute observes. Making matters worse are the conflicts emerging between the country’s largest political parties and pro-Iranian Shia militias.

Iraqi journalist and Bayan Center researcher Sadek Ali Hassan places the Basra protests in a larger context, in Thirst For Decentralization in Southern Iraq: the Iraqi government’s previous decision to decentralize control of provincial services, and the major challenges this has caused for Basra’s infrastructure development. In the Fikra Forum, Hassan demonstrates the difficulties of fixing this crisis, but outlines the federal government’s options for mitigating it. 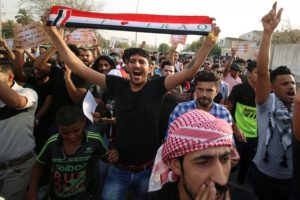 In light of the recent Iraqi elections, the Hudson Institute will host a panel led by senior fellow Michael Pregent to examine the current state of Iraq, in particular: the new political coalitions forming; the outside influence of Iran and the U.S.; and the recent protests in Basra. Panelists will include Michael Pregent, a senior fellow at Hudson Institute; Ahmed Ali, the director of the National Endowment for Democracy’s Iraq program; Jomana Qaddour, the co-founder of Syria Relief & Development; Omar al-Nidawi, the Iraq director at the strategic advisory firm Gryphon Partners.

RSVP This event will be livestreamed.