Leaders of Ethiopia’s restive northern Tigray region said on Monday the federal government led by Prime Minister Abiy Ahmed had launched more than 10 air strikes against them in recent days. The Tigray People’s Liberation Front (TPLF), which governs the northern region on the border with Eritrea and Sudan, did not mention any casualties in a statement on Facebook, Reuters reports.

“Ethiopia is like an empire crumbling before our own eyes,” said one diplomat.

Will Davison, senior analyst at the International Crisis Group thinktank, asked: “If this conflict becomes entrenched, will the federal government start to look for a negotiated solution and the Tigray leadership do the same?”

Davison said that the TPLF might be capable of a strong counter-offensive. “The path to making the Tigrayan leadership surrender appears arduous,” he said.

It is clear the Ethiopian government now faces numerous challenges due to deep running cleavages that are yet to be properly addressed, argues Deprose Muchena, Amnesty International’s Director for East and Southern Africa:

The government needs to facilitate and not repress freedom of assembly, navigate complex security situations and protect the population in line with international human rights law. It must ensure that only strictly necessary and proportionate force is used to manage violence during some protests, and must end the use of excessive force, mass arrests and prolonged detention without trial or charge, if it does not wish to further exacerbate tensions and slide back to the repression of the past. 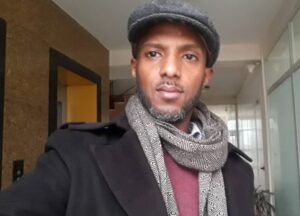 Security forces on Saturday arrested Medihane Ekubamichael (right), an editor at the Addis Standard, a partner of the National Endowment for Democracy (NED).

“Medihane is an essential part of our newsroom and has proved his journalistic integrity at a time when independent media is increasingly under pressure from different interest groups. We urge the police to expedite his release. His absence at this critical moment when journalism is needed more than anytime else will greatly affect our ability to provide timely information,” said Tsedale Lemma, Addis Standard Editor-in-Chief.

A leading Kenyan political analyst is warning that Ethiopia could be heading towards civil war and a humanitarian crisis unless the international community intervenes. Peter Kaganja of the African Policy Institute (above) said that Ethiopia was “hurtling down to a very dangerous civil war that is going to be perilous to the Horn of Africa region.” He said that an intervention from IGAD (Intergovernmental Authority on Development), the African Union and the United Nations Security Council was needed in order to halt further conflict.

State forces aren’t suspected of direct participation in recent mass killings, and while perpetrators are rarely identified, the government typically blames Oromo Liberation Army militants. Regardless, the army’s inability to prevent these killings and the breakdown in order has left citizens dismayed, VICE News reports.

“Ethiopians are losing hope in their government,” said Befekadu Hailu, the executive director of Ethiopian rights watchdog, Card Ethiopia. “It is leading to increasing calls for civilians to set up self defense mechanisms and is fostering division.”