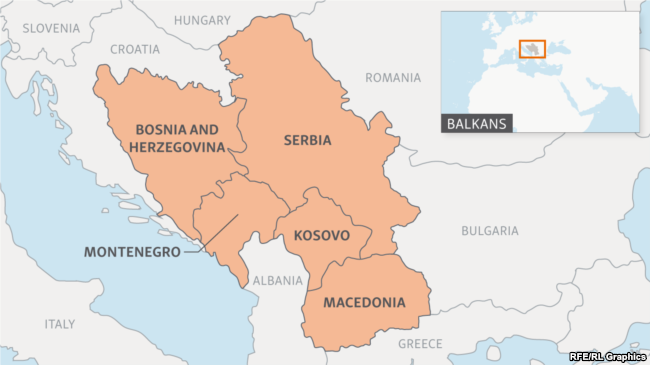 The European Union sought on Tuesday to reinvigorate the membership ambitions of six Balkan states and reclaim the region as its own amid growing Russian and Chinese influence, setting 2025 as a goal for Serbia and Montenegro to join, Reuters reports:

EU officials now insist there is no alternative but for Albania, Bosnia, Kosovo, Macedonia [a possible democratic success story?], Montenegro and Serbia to join the European Union. Their inclusion in the EU is being held up as an EU ideal that is long overdue since the end of the Cold War and the break-up of Yugoslavia in the 1990s. Enlargement Commissioner Johannes Hahn told Reuters last month it was “time to finish the work of 1989.”

But [the EU] makes clear to politicians in all six countries that they will have to get much more serious about establishing the rule of law, cutting out corruption, cracking down on organized crime, settling bilateral disputes and undertaking a range of other democratic changes, POLITICO adds.

“Joining the EU is far more than a technical process. It is a generational choice, based on fundamental values, which each country must embrace more actively, from their foreign and regional policies right down to what children are taught at school,” says the new strategy, obtained by POLITICO ahead of its approval by the Commission on Tuesday.

The prospect of democratic reforms required by the EU accession process will be welcomed by pro-democracy and civil society activists concerned about Russia’s growing influence in the Balkans, which has been associated with an upsurge in illiberal and nationalist sentiment.

Serbian nationalist groups and pro-government media are reportedly targeting Natasa Kandic (right) of the Belgrade-based Humanitarian Law Center  [and a recipient of the National Endowment for Democracy’s 2000 Democracy Award] after she was nominated for the 2018 Nobel Peace Prize.by US Congress Helsinki Commission Chairman Senator Roger Wicker and Representative Eliot Engel, ranking member of the US House Committee on Foreign Affairs.

According to the Commission, Kandic founded the Center (Fond za Humanitarno Pravo) in 1992 “to document egregious human rights violations committed during the conflicts associated with the breakup of the former Yugoslavia.”

“More than 25 years later, the Humanitarian Law Center continues to fight for justice for victims of war crimes and to battle the extreme nationalism and strained ethnic tensions that linger in the Western Balkans,” the statement said.