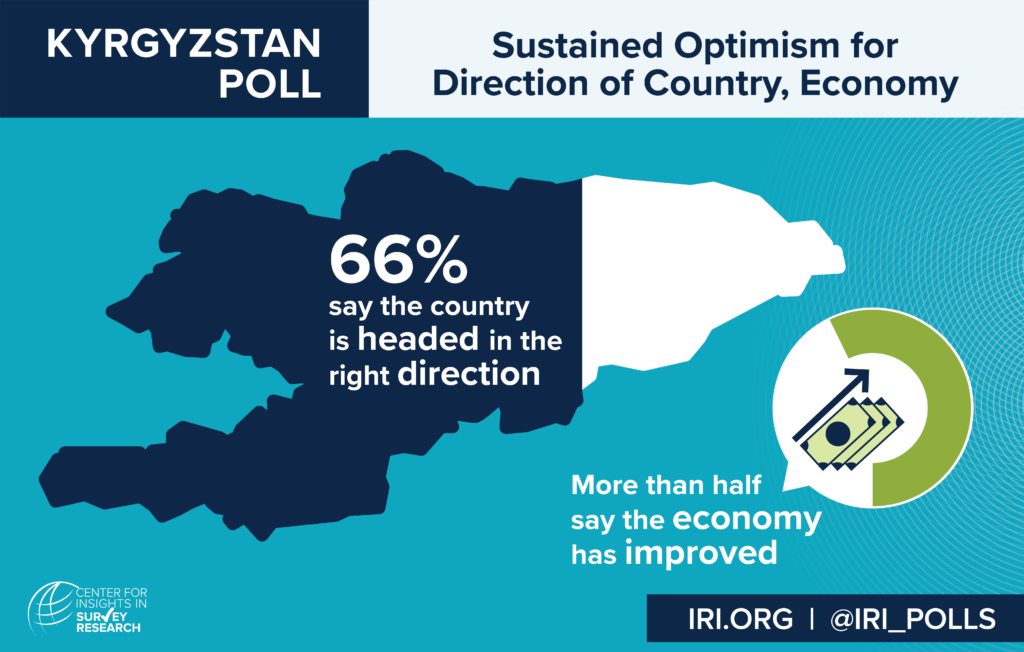 Kyrgyzstan’s citizens demonstrate sustained optimism over the country’s trajectory and economic performance, tempered by an overwhelmingly high number who think corruption is a problem, according to a nationwide poll by the International Republican Institute’s (IRI) Center for Insights in Survey Research:

Sixty-six percent of respondents believe that the country is headed in the right direction, reflecting a continued trend in polling that has been evident since February 2015. Optimism over the economic situation is also on the rise: a combined 46 percent report that the financial situation of their household has either “improved a lot” or “improved somewhat” over the past 12 months—a six-point improvement since March 2017.

The poll also reflects continued concerns over corruption. A combined 95 percent of respondents think that corruption is either a “very big” (74 percent) or “big” (21 percent) problem. Most respondents believe that reforms are necessary to address Kyrgyzstan’s problems: 36 percent favor “structural and systemic” reforms, and 32 percent want “gradual reforms which preserve the existing system.”

“This positive trend in public opinion indicates that the Kyrgyz people are responding to economic improvements,” said Stephen Nix, Regional Director for Eurasia for IRI (a core institute of the National Endowment for Democracy). “The government must take advantage of this opportunity to show that they are listening to the views of Kyrgyz citizens, and are prepared to address issues requiring action and reform such as corruption.”