Want to learn more about how the spread of #deepfake videos & #disinformation threaten our democratic elections? Watch our session w/ @Microsoft on the different strategies that social media platforms can take to curb infodemics – watch here https://t.co/vDNS9T9lT0 #DefendDemocracy pic.twitter.com/6YcOsjgakP

We are in a narrative battle over what type of governance model should prevail in the 21st century, notes Eileen Donahoe (above, left), Executive Director of the Global Digital Policy Incubator at Stanford University Cyber Policy Center. We were already at risk of an unconscious drift toward digital authoritarianism before COVID-19 hit. Failure of democracies to even consider the impact of new digital tools and emergency regulations on human rights during this pandemic will only exacerbate this trend.

But most democratic governments are failing on two fronts: first, in combatting the virus effectively, and second, in applying human rights analysis to the emergency measures taken, she writes for the American Interest:

Now is the time when democratic governments must show their mettle and demonstrate the feasibility of adhering to their own normative commitments, adds Donahoe, and National Endowment for Democracy (NED) board member. Unless they assert more effective, values-driven leadership, COVID-19 could hasten the demise of the post-WWII liberal international order. The consequence of that loss will be with us long after the virus is gone. 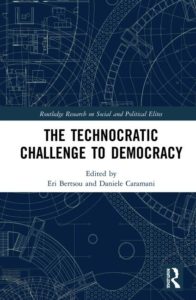 Drawing on a new book, of The Technocratic Challenge to Democracy, co-editor Eri Bertsou, Senior Researcher in Comparative Politics at the University of Zurich, presents five lessons learned from research on technocratic politics and the role of independent experts in democratic systems:

1. Independent experts are key parts of modern democratic systems – even if technocratic power is often described as a counterweight to democratic power. …. Independence and scientific expertise allows technocrats to advocate for responsible governance – efficient and optimal outcomes that are an integral part of democratic political systems.

2. Technocratic expertise can be non-partisan, but not apolitical. The moment independent experts operate within politics, make political decisions, or are involved in the decision-making process, they become political actors. Political decisions are formulated to achieve specific goals and have important implications, often redistributive in nature….

3. False dichotomies: an important caveat of independent expertise in politics. The belief that there can only ever be a choice between a ‘correct’ decision or a ‘wrong’ one is a false dichotomy. It makes opposition to technocratic advice impossible….

5. People evaluate independent experts relative to partisan political actors and vice-versa. Technocratic cabinets emerge in the presence of a crisis, when the existing partisan actors are unwilling or unable to respond to the social, economic or structural failures of the system….RTWT

The Alliance of Democracies Foundation in cooperation with Microsoft’s Defending Democracy Program presents a 3-part webinar #DefendDemocracy Virtual Series: “What you see is what you trust?” to discuss what threat disinformation and synthetic media – so-called deepfakes – pose to democracies today and in the future (below).