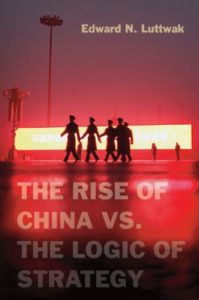 The world’s leading democracies will not be judged by how they initially responded to Covid-19, but by their success in post-crisis reconstruction, according to a leading analyst.

We always knew that China’s party regime, under Xi Jinping’s autocratic rule, must suppress the truth, says Edward Luttwak, a senior associate at the Center for Strategic and International Studies in Washington, DC. What we could not imagine is that despite the country’s experience with SARS in 2003, party leaders in Wuhan would conceal the arrival of a similar new coronavirus and silence doctors, including the late Li Wenliang who tried to warn us all. He is now the hero to all sentient Chinese, but the party wants them and the entire world to admire President Xi instead, in spite of his own blunder in closing Wuhan much too late, he writes for The Economist:

China’s success is a mirage. Taiwan, Hong Kong, Singapore and South Korea all outperformed China in taming the virus without hammering apartment doors shut to enforce quarantines. This is a fact well understood around the world, as well as inside educated China, judging by the scorn on social media for the party’s attempt to claim credit for having mitigated the disaster that it initially tried to keep quiet.

None of the EU, America and Britain will be measured by their stumbles in reacting to the virus, adds Luttwak, author of The Rise of China vs. the Logic of Strategy.  They will be measured by how fast their economies and cultures recover from their various lockdowns. It is a valid test of the overall quality of their governance, as well as of their societal flexibility, which varies greatly.

Although the precise political impact of coronavirus remains unclear, it will almost certainly fundamentally reshape the relationship between citizen and state, notes one observer.

The so-called ‘Ratchet Effect’ means we expect after a major crisis that the size of government does not revert to pre-crisis levels, adds Professor Matthew Goodwin, co-author, with Roger Eatwell, of “National Populism: The Revolt Against Liberal Democracy.” In the aftermath of both world wars, a massive expansion of state responsibilities and spending commitments saw a larger role for the state generally accepted in wider society. This made sense but eventually led to big inefficiencies. Political leadership is needed to know when and how to cut back the state, he writes for Chatham House:

Contrary to the narrative they can be a ‘great leveller’, recent work actually finds most pandemics lead to a ‘persistent and significant increase in the net Gini measure of inequality’. Five years after a pandemic hit, it was those with fewer educational qualifications and skills who suffered the most – the very same groups that have been driving much of the political volatility we have been witnessing over the past decade.

Journalists, activists, and businesspeople such as Xu Zhiyong, Chen Qiushi, Fangbin, and Li Zehua have disappeared after their critical reporting about responses to COVID-19, note Jianli Yang, founder and president of Citizen Power Initiatives for China, and Aaron Rhodes, human-rights editor of Dissident magazine and the president of the Forum for Religious Freedom Europe. Is your government investigating these disappearances? they ask Cui Tiankai, China’s envoy to the U.S. Why are state authorities investigating tycoon Ren Zhiqiang, who raised legitimate questions about how COVID-19 has been handled? Why has scholar Xu Zhang Run, whose concerns have been aired in this publication, been silenced? Was Dr. Ai Fen pressured by authorities after her reports on COVID-19? they write in the National Review.

In Zimbabwe organizations like National Endowment for Democracy (NED) grantee Zimbabwean Lawyers for Human Rights (@ZLHRL) have refocused and are zooming in on protecting and defending citizens’ rights during the lockdowns, says Carnegie Endowment Civic Research Network member Maureen Kademaunga.

In #Zimbabwe organizations like @ZLHRLawyers seemed to have refocused and are zooming in on protecting and defending citizens' rights during the lock downs.
@CarnegieEndow #CivicResearchNetwork member @MaureenKade on Global Civil Society and the #Pandemic pic.twitter.com/b5Kyx7fEEH