From Mexico to Iran, democracy is often a casualty of revolutionary politics undertaken in the name of liberty or opposition to tyranny, says a leading observer.

The best-known modern revolutions have invariably been preceded by increasing polarization and an inability to solve pressing social and economic problems, notes Daniel Chirot, the Herbert J. Ellison Professor of Russian and Eurasian Studies at the Henry Jackson School of International Studies at the University of Washington.

Growing hostility and mistrust fuel protest, eventually leading to violence. Extremism increases because moderates find themselves forced to ally themselves with those farther to the left or right. Those who try to find compromises with moderate forces on the other side wind up being vilified and excluded, he writes in Reform or Revolution? for Project Syndicate. 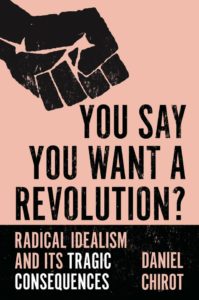 What can we learn from these and many analogous cases? Chirot asks in The American Interest:

This essay is adapted from You Say You Want A Revolution? Radical idealism and Its Tragic Consequences, published by Princeton University Press.