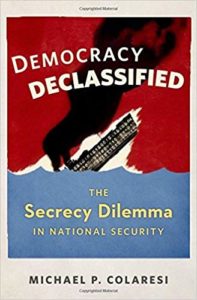 The alliances, cooperation, and coordination that comprise the liberal world order depend on sufficient public political support and trust within and across democracies, notes Michael Colaresi, William S. Dietrich II Professor of Political Science Research at the University of Pittsburgh, and author of Democracy Declassified: The Secrecy Dilemma in National Security.

Unlike traditional gate-keeper modes of mass information transmission that have been active in liberal states for the last century, social networks directly connect democratic citizens to content propagated from potentially adversarial users and bots around the world, he will tell the Center for Informed Democracy and Social Cybersecurity (IDeaS) seminar today;

This new information environment has created the opportunity for countries such as Russia to pursue adversarial digital disinformation campaigns, exploiting the fact that democracies run on citizens’ beliefs and perceptions. Despite the detection of these campaigns across developed democracies, there is currently limited systematic understanding of their motivations and effectiveness across individual, group, and societal scales. …..Simulations clarify the vulnerability of democratic publics to adversarial disruption campaigns, particularly when adversaries have access to high resolution surveillance of citizens prior beliefs and prejudices.

Without fundamental changes and investments to improve the information-architecture in democracies, there is cause for pessimism about the stability of democratic cooperation in the digital age, Colaresi adds. One kernel of hope resides in the relative resilience of expert-knowledge on socially-edited, non-profit platforms such as Wikipedia, in comparison to the ad-based, solo-authored networks.

Key suggestions for the next phase include:

The EU Code of Practice on Disinformation (COP) produced mixed results, according to a new analysis. Self-regulation was a logical and necessary first step, but one year on, few of the stakeholders seem fully satisfied with the process or outcome. Strong trust has not been built between industry, governments, academia, and civil society, notes the Partnership for Countering Influence Operations (PCIO), an initiative of the Carnegie Endowment for International Peace. Most importantly, there is more to be done to better protect the public from the potential harms caused by disinformation. In addition, it identifies three key recommendations:

The U.S. Department of State Bureau of Democracy, Human Rights and Labor (DRL) has announced an open competition for awards up to $800K for projects that support investigative journalism, especially on corruption and mis- and dis-information.

When political leadership casts doubt on the integrity of democratic institutions, particularly without any evidence, it is extremely damaging to the function of those institutions, Alliance for Securing Democracy (ASD) Director Laura Rosenberger told The Washington Post.

For a long time, Russian official media channels have been promoting internal political divisions, ASD’s Head of Research and Policy Jessica Brandt told Reuters. The United States needs to take politics out of its efforts to unmask and respond to interference operations, she added in a “Background Briefing.”

On Monday, 9th March, court hearings will begin in The Netherlands in an attempt to determine criminal responsibility for the destruction of Malaysian Airlines flight MH17, the Henry Jackson Society adds. MH17 was destroyed over in eastern Ukraine on 17 July 2014, killing all 298 people on board. On the basis of the investigation conducted by the Joint Investigation Team (JIT), Dutch prosecutors are prosecuting four suspects – three Russians, and one Ukrainian – for bringing down the airplane. International arrest warrants have been issued for all four.

To mark the start of the Dutch court hearings into the MH17 tragedy, the Henry Jackson Society and the Embassy of Ukraine invite you to a panel discussion with Michael Bociurkiw, a Canadian expert on mis- and dis-information; Eliot Higgins, Founder of Bellingcat [a partner of the National Endowment for Democracy (NED) that has been described as “a thorn in Putin’s side“]; and Roland Oliphant, Senior Foreign Correspondent, The Telegraph. RSVP