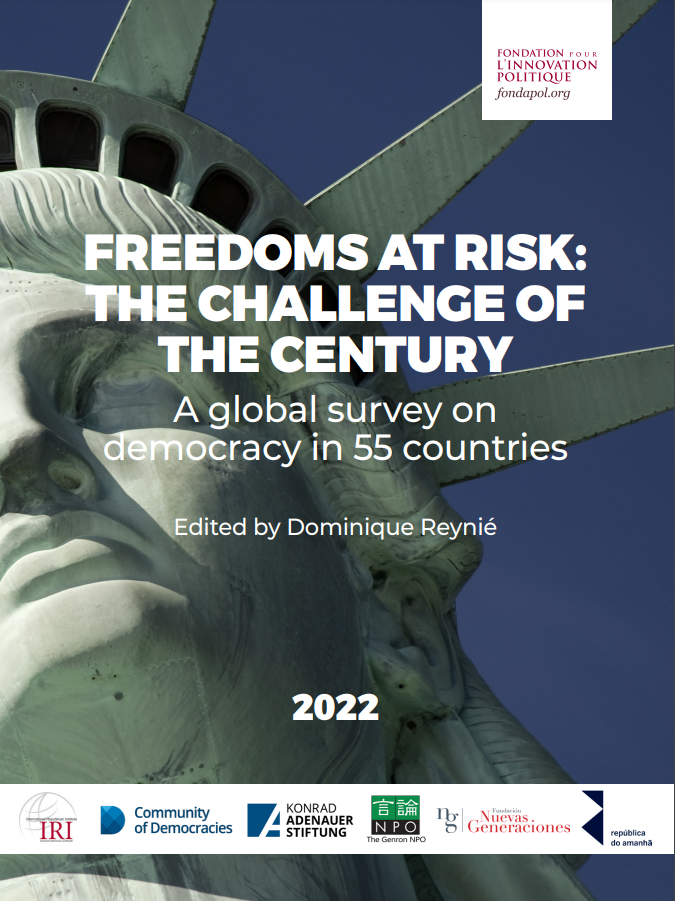 Democratic societies still retain a “priceless asset” that is illustrated in the results of a major new study. The citizens surveyed across 55 countries have confirmed their commitment to the values of  freedom and democracy, notes Dominique Reynié, University Professor at Sciences Po, and Executive Director of the Fondation pour l’innovation politique (Fondapol).

“Our data show that when they voice disapproval, more often than not, the object of their criticism is not the idea of democracy itself but rather the way in which democracy functions in their country,” he writes in Freedoms at Risk: The Challenge of the Century. “Freedom is not cultural. It is a human aspiration. Within us lies the force most capable of guaranteeing the
sustainability of democracy in the twenty-first century.”

For dictatorships, the challenge of the century is twofold, Reynié adds:

As Daniel Twining, president of the International Republican Institute (IRI), points out: “Autocrats are attacking open systems in part to stymie their own people’s natural attraction to freedom. Great-power authoritarians in China and Russia view subverting democratic practice as central to their geopolitical ambitions; should not free nations see protecting and promoting democracy as part of ours?”

Fondapol partnered with IRI, the Community of Democracies, the Konrad Adenauer Stiftung (Germany), the Genron NOP (Japan), the Fundación Nuevas Generaciones (Argentina) and República do Amanhã (Brazil) to develop a 39-question survey administrated by Ipsos – a leading polling company. RTWT