Disturbing global trends, such as populism and authoritarianism, are imperiling the basic tenets of liberal democracy, according to the Renew Democracy Initiative (RDI), an effort to reinvigorate democracy and combat the extremism that deforms public debate.

“The liberal-democratic order is under attack from within and without,” the manifesto adds. “The immediate need is to help restore political confidence and ideological balance to traditional center right and center left parties on both sides of the Atlantic.”

The initiative aims to help generate “fresh thinking about good ideas…. and to convene the best minds from different countries to come together for both broad and discrete projects in the service of liberty and democracy in the West and

beyond.” (Join the RDI manifesto signatories – who include the National Endowment for Democracy – here).

RDI’s manifesto isn’t limited to the problem confronting the United States, Max Boot writes for the Washington Post. It addresses a worldwide phenomenon — the rise of authoritarian populists such as Prime Minister Viktor Orban of Hungary and President Rodrigo Duterte of the Philippines.

In his speech to the U.S. Congress, French President Emmanuel Macron issued a full-throated defense of liberal democracy and called on the U.S. to maintain its role as a global defender of democracy and human rights. 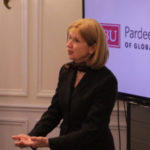 The prospects of it doing so will be enhanced if news reports of plans to nominate a former senior Bush official, Paula Dobriansky, (left), a veteran foreign affairs expert, to the State Department’s top policy post.

One of the clear lessons of the past two years is that our system is based on norms as well as rules, notes Gregory Koger, a professor of political science at the University of Miami.

The U.S. Congress can promote democratic norms is by providing an example of appropriate discourse. Indeed, these norms are built into the rules of Congress, so legislators simply have to live by their own rules, he writes for Vox: