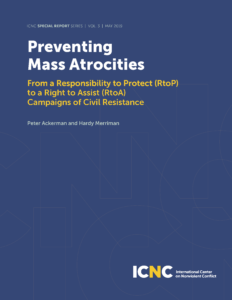 Despite the much-lamented global democratic recession, recent protests in Hong Kong, Russia, and elsewhere testify to the innate human desire for freedom and dignity. The question of when and how to support such movements can create excruciating dilemmas for external actors, state and nonstate alike, he writes for World Politics Review:

In a provocative report, “Preventing Mass Atrocities: From a Responsibility to Protect (RtoP) to a Right to Assist (RtoA) Campaigns of Civil Resistance,” Peter Ackerman and Hardy Merriman of the Washington-based International Center on Non-Violent Conflict, or ICNC, set out the dos and don’ts for those who would assist local struggles against authoritarian rule. The centerpiece of their argument is a proposed new international norm, the Right to Assist, or RtoA, which would legitimate outside aid for nonviolent civil resistance movements that are committed to democratic goals.

There is much to commend in the document, but it leaves several important questions unanswered, Patrick contends. RTWT