China is sending doctors and medical supplies to Italy and other countries that have been hit hard by the coronavirus. WSJ’s Eric Sylvers in Milan explains how China is using soft power to change perceptions about its handling of the pandemic.

With its economy showing signs of life, China has launched a new propaganda push to repair the serious damage that the coronavirus pandemic — which originated in China — has done to its reputation at home and abroad. China is intent on showing itself as a responsible power, just as it did in the aftermath of the 2008 financial crisis when Beijing’s economic stimulus helped lift global demand, The FT’s James Kynge and Hudson Lockett report:

China had been looking for — an opportunity to start reframing its role from that of the country that accelerated the virus’s spread through cover-ups, to that of the magnanimous global power offering leadership at a time of panic and peril in much of the rest of the world. …China’s state media has also claimed that its authoritarian governance system is better suited to cope with a viral outbreak than democratic systems, even though this ignores the performance of Taiwan and South Korea, which arrested the virus’ spread far more effectively than China. Such moves, say analysts, are undermining the soft power projection that Beijing is aiming for.

“China is trying to turn its health crisis into a geopolitical opportunity,” says Yu Jie, senior research fellow on China at Chatham House, a UK think-tank. “It is launching a soft power campaign aimed at filling the vacuum left by the United States.”

China’s recent actions, including the expulsion of US journalists this month, made potential co-operation with the US to combat the virus more difficult, said Minxin Pei, a professor at Claremont McKenna College and a contributor to the NED’s Journal of Democracy. “Instead of touting the superiority of its one-party regime, China will do well to be a generous global leader that shares its medical resources and supplies with other countries, especially developing countries in desperate need of help,” he told The FT.

“Its progress was achieved at horrendous cost. Since arguably China could have prevented the outbreak in the first place if it had a more transparent system and greater press freedom, Beijing could try to cite its success as proof of the capabilities of its political system, but not many people outside China would buy it,” he adds. 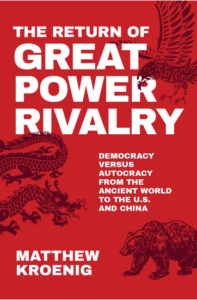 The US and China are engaged in a fight to shape the narrative about the origins of the pandemic, CNN reports. It’s a sign of what a recent book called The Return of Great Power Rivalry, observers suggest.

“When you have the Chinese ambassador and the foreign minister saying through their propaganda machine that the United States military somehow concocted this virus and spread it in China, it’s absolutely false,” Texas Rep. Michael McCaul, the top Republican on the House Foreign Affairs Committee, told CNN in an interview Monday.

“Everybody knows the truth here, and the truth needs to come out. And they don’t want the truth to come out. That’s why they’re starting this disinformation campaign,” he said.

The European Union’s top diplomat also fired a warning shot at China’s “politics of generosity”, amid a growing sense of unease over Beijing’s targeted strategy to help certain European countries with medical supplies to fight Covid-19, The South China Morning Post reports. In an unusual choice of language, the bloc’s foreign policy chief Josep Borrell called on EU countries to stand ready for a “struggle for influence” in a “global battle of narratives”.

As scientists around the world—including from China—are working at breakneck speed to develop a vaccine for the coronavirus, the Chinese Communist Party continues to sow the seeds of division and misinformation world-wide, the Hudson Institute’s John P. Walters observes.

‘Black swan’ events like the coronavirus outbreak tend to expose the central weakness of authoritarian regimes: they cannot be seen to fail, even under circumstances that almost always include a few highly public failures, notes analyst Robert Amsterdam.

Amidst the COVID-19 pandemic, China’s state-backed information operations have been following Russia’s playbook for spreading disinformation, an expert on the subject told a panel on Monday, Shannon Vavra writes for Cyberscoop:

The Chinese Communist Party, typically thought to run disinformation operations aimed at controlling the narrative, is mirroring behavior that is historically associated with Russian disinformation — spreading chaos and confusion. In this case, it’s about whether the coronavirus actually originated in China, Laura Rosenberger, the director of the Alliance for Securing Democracy, said during a disinformation event hosted by the CyberPeace Institute (CPI), a nonprofit founded last year to call out malicious cyber activities.

“Russia’s focused on sowing confusion,” Rosenberger said during a panel. “We see China’s propaganda apparatus evolving and taking lessons from Russia in this moment … China was much more focused on narrative creation and control [before].”

Rosenberger wrote in a tweet that, much like Russian propaganda, China’s strategy now seems to be to “spread multiple, conflicting conspiracy theories, not to convince people of an explanation but to create the idea that it’s impossible to know the truth,” Quartz adds.

“China is trying to capitalize now in terms of soft power,” Joshua Kurlantzick, senior fellow at the Council on Foreign Relations, told The FT.

It will likely be the free nations of the world, with their superior capacities for scientific innovation, that develop treatments, a vaccine and new means of stopping the epidemic, Hudson’s Walters writes for the WSJ. And we can trust that they will share those innovations quickly with the world. It will also be the free economies, with their capacities for renewal and growth, that will bring back prosperity after the crisis abates. 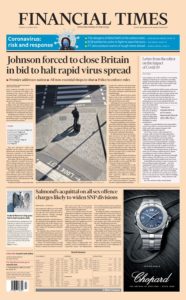 COVID-19 lays bare one of the many threats that authoritarian states like China pose, notes Patrick W. Quirk, IRI’s Senior Director of Research, Strategy, and the Center for Global Impact and a Nonresident Fellow in the Brookings Institution’s Foreign Policy Program:

By suppressing information and coercing their own people, corrupt regimes enable the spread of diseases that, if checked earlier through transparent means, would not be killing U.S. citizens.  Authoritarian regimes quash information that could negatively (but truthfully) portray their leaders’ performance. … Steadfast support to strengthen democratic institutions and their advocates will help mitigate the current pandemic’s impact on our citizens and prevent the next outbreak. 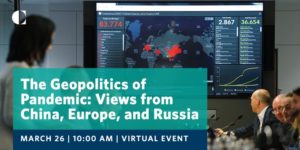 In fragile states, democracy needs, even more, strengthening in times of pandemics as citizens and institutions are exposed to increased vulnerabilities, NDI’s Ancuta Hansen reports from Iraq. In addition to the extraordinary effort of medical personnel providing life-saving health services, governments, civil society, and citizens alike need to do their part.

On Thursday, join @CarnegieEndow live as

@aarondmiller2 discuss how #COVIDー19 is likely to reshape geopolitics.