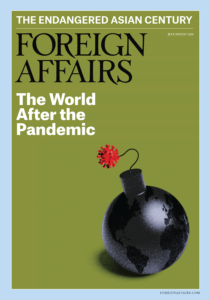 It is already clear why some countries have done better than others in dealing with the Covid-19 pandemic so far, and there is every reason to think those trends will continue, Stanford University’s Francis Fukuyama contends. It is not a matter of regime type. Some democracies have performed well, but others have not, and the same is true for autocracies. The factors responsible for successful pandemic responses have been state capacity, social trust, and leadership, he writes for Foreign Affairs:

Over the years to come, the pandemic could lead to the United States’ relative decline, the continued erosion of the liberal international order, and a resurgence of fascism around the globe. It could also lead to a rebirth of liberal democracy, a system that has confounded skeptics many times, showing remarkable powers of resilience and renewal. Elements of both visions will emerge, in different places. Unfortunately, unless current trends change dramatically, the general forecast is gloomy.

Forget the G-7, Build the D-10, analysts Erik Brattberg and Ben Judah argue in Foreign Policy. The world needs a summit of democracies to face emerging global challenges, they contend, suggesting that the U.K. could convene such a democratic deliberation.

So far, the principal concern about democracy in Europe during the coronavirus pandemic has been that governments will be tempted to retain the extraordinary executive powers they have assumed to manage the virus, says Carnegie analyst Richard Youngs. Now, a parallel issue is emerging that pulls in a very different direction: pressure to restore democracy may be propelling a predatory and polarized politics, he writes in Coronavirus and Europe’s New Political Fissures. 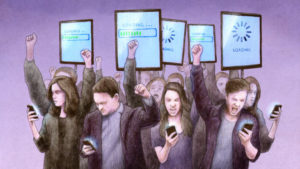 In Stifled Civic Space, democracies in Central Europe run at half speed, because the insecurity about the COVID-19 crisis perpetuates a number of restrictions on civil liberties and fundamental freedoms, argues Quincy Cloet, a Researcher with the Helsinki Foundation for Human Rights. Although the state of exceptions is formally lifted, civil society is restrained in how it can function in ordinary situations and perform its watchdog function. Inspired by Budapest, emboldened governments are seizing the opportunity to marginalise independent voices and support loyalist organisations, he writes for Visegrad Insight, a partner of the National Endowment for Democracy (NED). 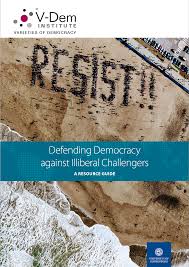 “Pandemic backsliding” is the label that V-Dem, the world’s leading database on democratic regimes, used to warn about the risks democracies face as the coronavirus spreads. Using data on COVID-19 responses by governments in 142 countries in April 2020, the V-Dem Policy Brief shows that 48 countries have a high risk of pandemic backsliding, while 34 are at medium risk, according to Eduardo Levy Yeyati, dean of the School of Government of Universidad Torcuato Di Tella, and Andres Malamud, a senior research fellow at the Institute of Social Sciences of the University of Lisbon, Portugal.

But recent research has shown a worldwide resort to institutional checks and balances in times of pandemic, countering “simplistic claims of executive concentration,” they write for Americas Quarterly:

Pandemic forthsliding is not inevitable, of course, and it may not even be the most likely outcome; but is it not implausible, either. Democracy is contingent on human, not viral action. Ailing democracies worldwide face a chance not just to resist or fail but to get tougher, and better. May a deadly virus be turned into a democratic vaccine.

Nevertheless, just as the Great Depression not only produced fascism but also reinvigorated liberal democracy, so the pandemic may produce some positive political outcomes, too. It has often taken just such a huge external shock to break sclerotic political systems out of their stasis and create the conditions for long-overdue structural reform, and that pattern is likely to play out again, at least in some places, Fukuyama adds. But…..

Another reason for pessimism is that the positive scenarios assume some sort of rational public discourse and social learning. Yet the link between technocratic expertise and public policy is weaker today than in the past, when elites held more power. The democratization of authority spurred by the digital revolution has flattened cognitive hierarchies along with other hierarchies, and political decision-making is now driven by often weaponized babble. That is hardly an ideal environment for constructive, collective self-examination, and some polities may remain irrational longer than they can remain solvent.

“With the most urgent and tragic phase of the crisis past, the world is moving into a long, depressing slog. It will come out of it eventually, some parts faster than others,” Fukuyama suggests. “Violent global convulsions are unlikely, and democracy, capitalism, and the United States have all proved capable of transformation and adaptation before. But they will need to pull a rabbit out of the hat once again.”