Is the failure of democratic leaders to effectively champion democratic values and rights a factor in enabling the rise of autocrats?

Autocratic leaders faced significant backlash in 2021, but democracy will only win the battle for hearts and minds if leaders address major challenges to show that democratic government delivers on its promised dividends, according to the Human Rights Watch World Report 2022.

“But the superficial appeal of the rise-of-autocracy thesis belies a more complex reality—and a bleaker future for autocrats,” it states. “As people see that unaccountable rulers inevitably prioritize their own interests over the public’s, the popular demand for rights-respecting democracy often remains strong. In country after country, large numbers of people have recently taken to the streets, even at the risk of being arrested or shot. There are few rallies for autocratic rule.”

Despite last year’s authoritarian gains, there is hope for a democratic resurgence in some places, the report states, noting that “alliances of opposition parties have formed” prior to forthcoming elections in Hungary and Turkey.

The cultural attitudes underpinning authoritarian forces tend to be prevalent among the less secure economically, the less tolerant, such as nativist and nationalist elements, says political scientist Pippa Norris, co-author of Cultural Backlash. But political trajectories are not just driven by demography and don’t move in one direction, she tells the Niskanen Center’s Matt Grossmann. Long-term trends, such as growing education, urbanization and the demographic changes of age and generation are moving in a more liberal course.

“One question is whether established liberal democracies are too sclerotic, too fixed. … thinking that the way that they do things are the only way to do things,” she adds “Sometimes new democracies have an advantage because they know that they’re starting off, in a sense, with a blank slate. And they’ve got to establish an effective electoral system. And so the international community in conjunction with local electoral law experts, electoral political scientists, and others who have been brought in, have managed to actually create some very effective elections in countries.” 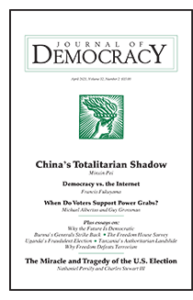 Liberal democracy is based on an informal social contract according to which principals authorize agents to act on their behalf in the expectation that they will fulfil their responsibilities with competency, integrity and impartiality, she contends in a forthcoming book. In Praise of Skepticism draws on new data from the European Values Survey/World Values Survey of over 650,000 respondents in more than 100 societies over 40 years.

Christian Welzel also drew on World Values Survey data to argue that the swelling pessimism about democracy’s future is unwarranted. Values focused on human freedom are spreading throughout the world and suggest that the future of self-government is actually quite bright, he wrote in Why the Future Is Democratic, an April 2021 article for the NED’s Journal of Democracy.