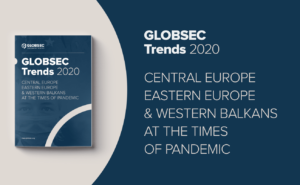 Contentious elections in divided countries can cause lasting damage to the legitimacy of democratic institutions, even if some observers have underestimated the resilience of democracy and rule of law, says a leading expert.

In a liberal democracy, legitimacy is the mechanism that ensures voluntary compliance with the decisions of officeholders and acceptance of the rules of the game, argues Pippa Norris, the McGuire lecturer in comparative politics at Harvard University and the founding director of the Electoral Integrity Project:

Without legitimacy, liberal democracies grind to a halt. It’s like trying to play ball without accepting a shared rule book and umpire. Liberal democracies thrive when citizens, parties and leaders battle passionately for diverse interests and ideas — they argue and debate and defend their values. But, ultimately, they also accept temporary defeats, even when they disagree ideologically with the victors.

More than 1/3 of respondents from 9 countries of Central and Eastern Europe believe in COVID-19 related conspiracy theories, according to a new GLOBSEC Trends 2020 survey. In line with this finding, the willingness to get vaccinated against the COVID-19 in the region is shared only among 37% of people. However, it rises to 53% among those who trust public authorities.

“This finding shows how instrumental good governance and trust between the public and the state authorities is, especially at times of crisis. The public authorities should enhance their strategic communication efforts and do everything possible to increase societal trust now,” said Miroslava Sawiris, research fellow from GLOBSEC, a partner of the National Endowment for Democracy (NED).

While people generally approve of EU and NATO membership and support democracy, a significant proportion of respondents perceive democracy as a threat once it is described as liberal (41%) and many see the EU as “dictating” their country what to do, GLOBSEC adds.

“The narratives demonizing ‘others’ and undermining core democratic values and our Euro-Atlantic partnership have been largely exploited by political actors in the region,” said Katarína Klingová, GLOBSEC senior research fellow. “A wide range of different groups now supposedly pose a threat to the values or identity of respondents, ranging from liberals, migrants, LGBT+ community to even the United States. Such othering and polarisation could develop into domestic culture wars.” 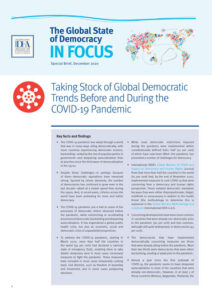 The pandemic has demonstrated “democracy’s resilience and capacity for renovation,” according to a new analysis. And democratic institutions, such as parliaments, courts, electoral commissions, political parties, media and civil society actors, have fought back against attempts at executive overreach and democratic trampling or collaborated to ensure effective responses to the pandemic, says the report from International IDEA.

Such measures as beneficial ownership laws that would stop foreign kleptocrats from stashing their wealth in places like New York and London, and new tools to counter digital authoritarianism that will be of use at home and around the world would demonstrate the resilience of democracy, and provide examples of how others can confront these challenges as well, argue Freedom House president Michael Abramowitz and Alex Thier, co-director of the Task Force on U.S. Strategy to Support Democracy and Counter Authoritarianism and senior democracy fellow at Freedom House.

The World Values Survey, which I run, has monitored public attitudes toward electoral integrity across a wide range of societies since 2012. The evidence demonstrates that public faith in electoral integrity matters for feelings of political legitimacy among supporters of all parties, Norris* writes for the Washington Post:

In general, conspiratorial beliefs about electoral fraud, rigged contests and stolen votes usually have damaging consequences. In many countries, contentious elections erode confidence in electoral authorities and procedures, deepen dissatisfaction with how democracy works, reduce citizens’ willingness to obey the law and to vote, fuel protest movements, and even, in the worst-case scenarios, trigger violence and exacerbate conflict in deeply divided societies such as such as Kenya, Belarus and Venezuela.