The European Union has pledged €1.45bn to reinforce political and financial support for The Gambia’s democratic transition.

“The#Gambia is showing to the world that freedom and democracy are about real people and real lives… not just abstract concepts,” said High Representative Federica Mogherini, while Antonio Tajani, president of the European Parliament recently described Gambia’s recent democratic strides as an African success story. President Adama Barrow “is going above and beyond to restore the rule of law, deepen democracy, advance transitional justice and transform the security sector,” an observer suggests.

The Gambia is described as “the star performer” in the 2017 rankings of the Economist Intelligence Unit’s annual Democracy Index, after it moved up 30 places in the rankings, losing its classification as an “authoritarian regime.” The Gambia’s status improved from Not Free to Partly Free as a result of improved political rights and civil liberties, according to Freedom House. In addition, “exiled journalists and activists returned, political prisoners were released, ministers declared their assets to an ombudsman, and the press union began work on media-sector reform,” it adds. 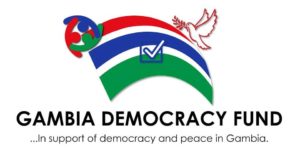 The country provides a text-book case for how to topple an autocrat, according to an in-depth analysis in the Guardian. The opposition Resistance put together Blueprint for a New Gambia, a document detailing, step by step, how to bring down dictator Yahya Jammeh.

The government that took office in January 2017, ending 22 years of authoritarian rule and repressive legislation and practices, has pledged to defend and promote freedom of expression, access to information and media pluralism. The authorities have already taken significant steps to implement these commitments, according to one report.

Recent elections, while plagued by low voter turnout, were free and fair, and Barrow (left) has been making good on his reform pledges, the Geopolitical Monitor reports. “President Barrow’s first 100 days have included some momentous steps forward for human rights, but there remains a huge amount to do in order to make a decisive break with the country’s brutal past,” said Alioune Tine, Amnesty International’s West and Central Africa Regional Director.

In December, the National Assembly established a Truth, Reconciliation and Reparations Commission (TRRC), which will take testimony from victims and perpetrators about rights violations committed under Jammeh and issue recommendations for reforms and prosecutions.

but political rivalries have increasingly taken an ethnic hue in the West African country, analysts suggest. If left unchecked the government risks alienating a segment of society and laying the groundwork for future problems. Despite setbacks, observers say the government is pursuing the necessary reforms to avoid a return to the dark days of dictatorship, even if progress has been slow.

“It’s clear the new government is genuinely resolved to make a clear and unequivocal break from the dictatorial past,” says Jeffrey Smith, director of Vanguard Africa, a pro-democracy outfit. “But the perception is that much of that goodwill has yet to be translated to on-the-ground results.”