The most important thing about South Korea’s legislative elections this week is the fact that they happened at all, notes John Delury, a professor of Chinese studies at Yonsei University, in Seoul, South Korea. They were the world’s first nationwide vote of the coronavirus era, and more than 29 million people — 66 percent of the electorate, the highest turnout in nearly three decades — cast ballots to choose 300 new members for the National Assembly, he writes for the Times:

Each polling station was equipped with hand sanitizer and disposable gloves; voters, wearing masks and standing far apart, had their temperatures checked at the entrances. No one seemed to feel they had to choose between exercising their democratic rights and protecting their health. …..But for the rest of the world, the significance of this election has little to do with its outcome. What matters most is that tens of millions of citizens were able to exercise their democratic rights even in the age of the coronavirus. 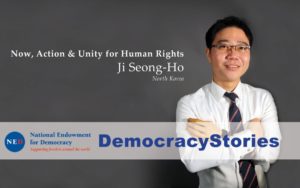 Thae Yong Ho (above) the second-highest ranking North Korean official to have defected to South Korea, made history becoming the first defector to be directly elected as a lawmaker in South Korea’s affluent Gangnam district, ABC News adds. Fellow defector Ji Seong-ho was also elected to the parliament as a proportionate representative for the Future Korea Party, the Times adds.